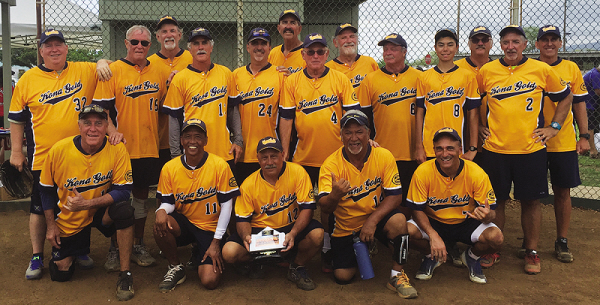 A huge rainbow of teams took to the field: Kona Gold tested their mettle and prevailed in the A Division

The 40th Hawaii State Senior Softball Tournament drew 67 teams to compete at Kailua-Kona on Aug. 4–6. This year, eight divisions vied for victory on Kona Makaeo ball fields at Old A’s Airport Park. Maui fielded 13 teams, while O‘ahu gathered 17. Hawai’i Island turned out a big 25 teams, and 12 more teams flew in from Kaua’i. When all the players huddled together for the Pledge of Allegiance, their vibrant colored team shirts created a solid rainbow — a sign of the great games ahead and a unified spirit. The heat rose, as pitchers and fielders stared down batters prepared to take the bases. By tournament end, brown dirt masked tennis shoes and sticky shins. It did not matter which team came in first, second, or third. Hats off, there were happy smiles all around.

One might assume that senior softball is an allmale game, but a number of women swung the bat too! The day shined with a love for the game, a get-together of friends, and good sportsmanship. That’s really what it’s all about — playing hard and having fun!