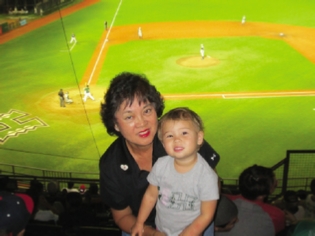 With granddaughter Alexis at a UH game.

Many of Hawai‘i residents are baseball fans, especially when it comes to UH’s Baseball Bows. We take pride in these young men who represent our state in collegiate competitions, now playing all their home games in “the house that Les built.”

The 2014 season marks the 30th anniversary of the Les Murakami Stadium (built in 1984 and previously named the Rainbow Stadium). Coach Les, who was the cover story of Generations’ April/May 2013 issue, was honored on February 21st to commemorate the three decades of the stadium. He became the UH head coach in 1971, won his 1,000th game in 1998, was inducted in the American Baseball Coaches Association Hall of Fame in 2001 and retired after 31 seasons.

I am proud to say that my husband and I have been UH baseball fans since we met in 1974. Our three children, and now our son-in-law Trey and granddaughter Alexis, enjoy watching at least one game of the home series. Over the years, we have seen great wins and heartbreaking loses. Our most memorable were probably the two longest UH games ever played (prior to the “Les” being built). As we recall, it was in 1976 and we stayed until after midnight, sitting outside the stadium in center field (Scholarship Hill), where Gerald Ako and Derek Tatsuno pitched their entire games of 17 and 18 innings — and won!

Watching UH baseball is a great tradition for my family. To join the fun, call 808-944-2697 or visit www.hawaiiathletics.com.