Al Harrington Discusses His Years … And Yours

At 77 years young, Al Harrington has seemingly lived the life of the American Dream—entertainer, actor, healer and educator.

Yet, after experiencing cancer and diabetes, Al was compelled to build the healing spirit in Hawai‘i. For him, that meant illustrating how new and old methods of healing can work well together. Most practitioners — whether traditional or modern — would say that health is about balance. At the Waianae Comprehensive Health Center, Al works with the staff to incorporate body, breath, spirit and nature into good health. And most recently he’s partnered with AlohaCare, using his teaching skills to educate seniors on how to get the most out of their Medicare benefits.

Here, we catch up with Al to learn how his diverse life experiences and successes have led him to servicing others. His story begins in American Samoa … 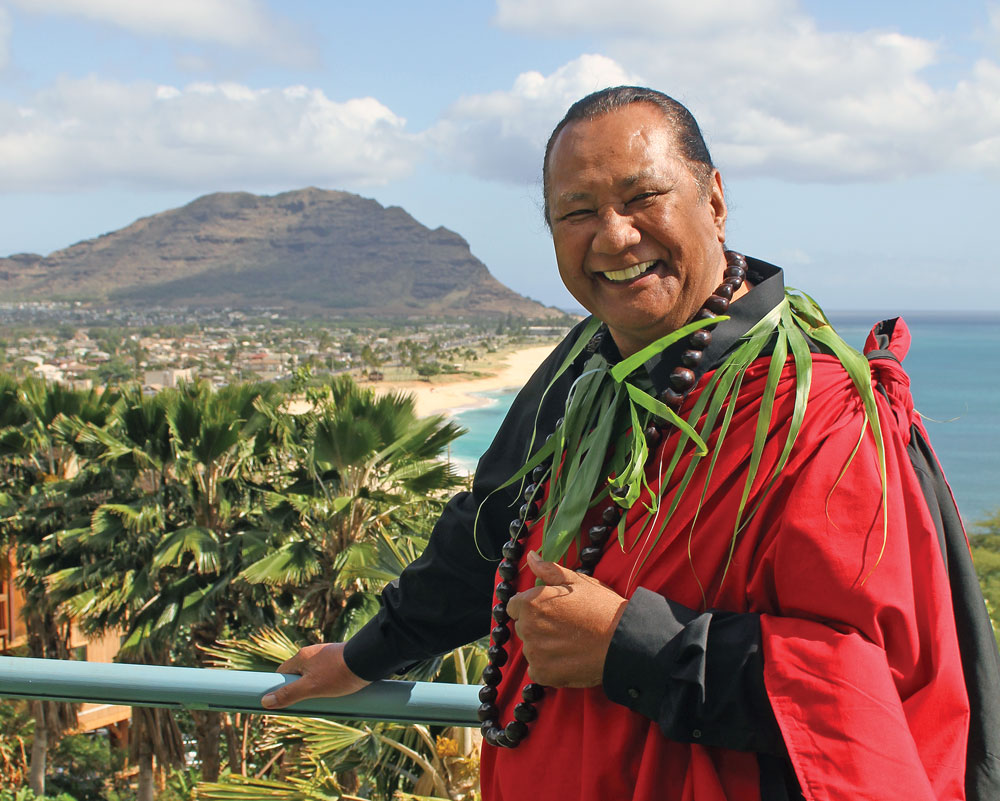 Up until the age of three, Al was raised in American Samoa by his maternal grandmother until his mother, Lela Su’a Paia, sent for him to join her in Honolulu where she was working as a nurse. Lela would eventually marry Roy Milbur Harrington, who Al says treated him like his own son; so much so, that Al eventually adopted his step father’s last name as his own.

“I grew up in Halawa Housing,” says Al. “Life wasn’t always easy back then, but I was very fortunate. The Lord gifted me with natural academic and athletic abilities and I was able attend Punahou School on a scholarship.” Al helped his team capture the State championship, and became the first high school All-American from Hawai‘i. His athletics and scholastic talents helped him land a scholarship at Stanford University, where he graduated with a degree in history.

After Stanford, Al got married, returned to Hawai‘i, taught history and coached at Punahou School. “Money was tight,” says Al. “My wife (at that time) and I were going to have twins and I didn’t even have enough money to pay the hospital bill where they were born!” The need for extra income became Al’s entry into the entertainment business. While teaching at Punahou, Al moonlighted as a performer at a luau in Waikiki. 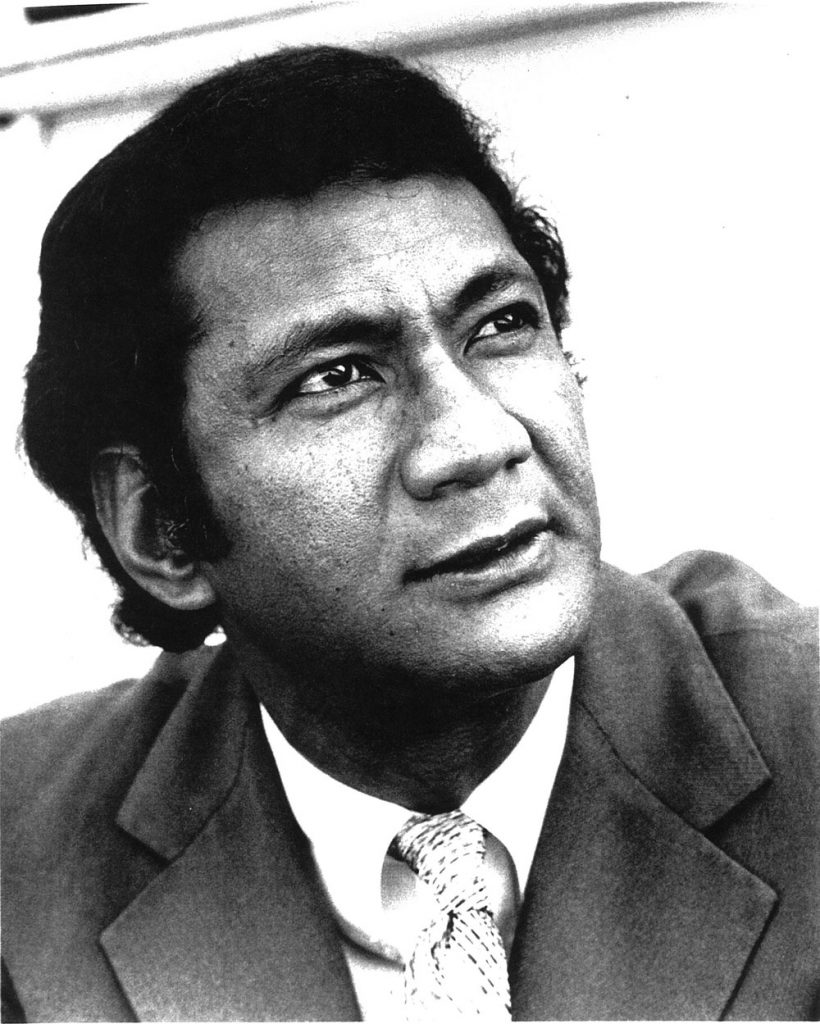 During one of those performances, Hawai‘i Five-O casting director, Ted Thorpe, who worked for Leonard Freeman, creator of Hawai‘i Five-O was in the audience. That was when Al was recruited and landed the role of Detective Ben Kokua in the original Hawai‘i Five-O. Life for Al would never be the same.

Next, Al moved on to headline the “Al Harrington Show” in Waikiki for more than 20 years. Affectionately known as “The South Pacific Man,” Al’s popularity in the ‘70’s and ‘80’s made him a household name. He, along with other entertainers such as Don Ho, Dick Jenson, Danny Kaleikini, and Moe Keale (Uncle of Brother Iz) all helped define Hawai‘i’s entertainment industry, promoting Polynesian-style song and dance to tourists from around the world.

After the Al Harrington Show ended in 1992, Al moved to Utah and later to Los Angeles where he enjoyed a successful movie career, acting as a Native American Indian in a number of films, including a starring role in Disney’s White Fang 2. 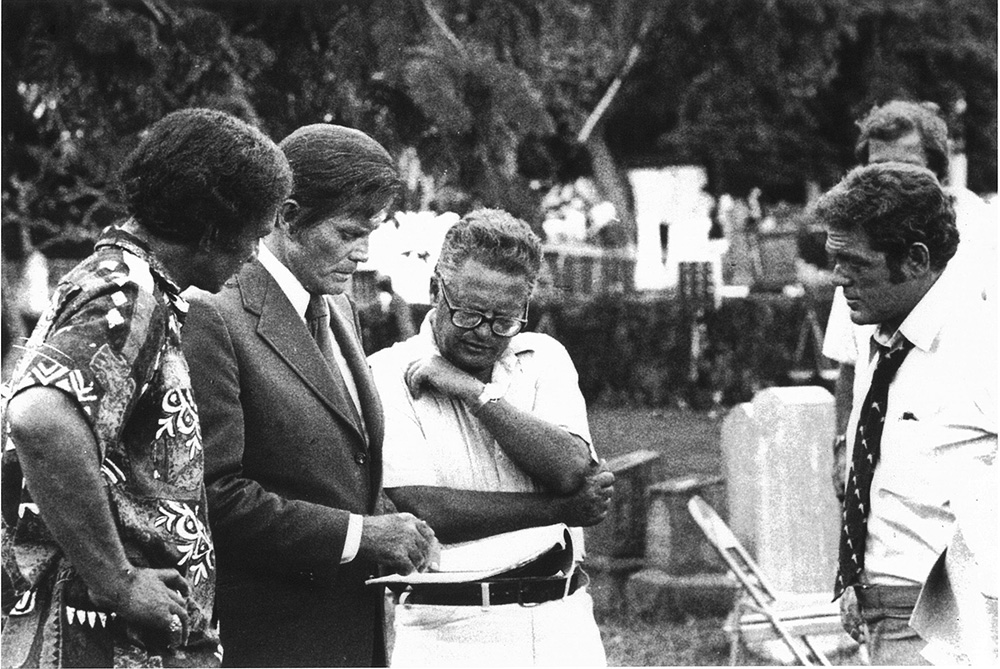 Al Harrington (first from the left) on the set with the
cast of Hawai‘i Five-0.

In 2005, Al returned to Hawai‘i where he has continued his role as educator, actor, entertainer and healer.

GM: You’ve certainly lived a life full of adventure and unexpected turns. How is life as a senior treating you?

AH: You know, the term ‘senior’ is really misleading and I don’t refer to myself or others in that way. People think of seniors as folks who have one foot in the grave; and that pretty soon, life as you know it is going to be “all pau.” But, nothing could be further from the truth! The whole concept of growing older is really a concept of positive growth, coming alive, coming into your own — being content with yourself. As you age you develop the wisdom, experiences and tools to help navigate through life’s ups and downs.

GM: Most people know you as ‘Al Harrington’ the entertainer and actor, but tell me about your role as an educator.

AH: I’ve always considered myself an educator, first and foremost. Education is really the crux of everything we do, even on the football field. I’ve had some of my most fulfilling moments in life as a teacher. When I was teaching at Punahou, I had some pretty smart kids in my class. Heck, some were probably even smarter than me! I had to figure out a way to help engage them in the learning process and to teach them the best lesson of all — never stop learning. I’ve had some wonderful teachers in my life that have taught me that life is a process and that process never ends.

GM: How is your life as an educator helping others today?

AH: Simplification is education. That’s what education is supposed to do. A good teacher will take a seemingly complicated topic and make it easy to understand. Many people who are approaching Medicare eligibility find it can be difficult to understand Medicare — there’s Parts A, B, C and D and many rules and regulations. Somehow, we’re supposed to know what to do and when. Just receiving that 2-inch-thick Medicare book in the mail is enough to make your head spin!

Taking care of our health by getting regular health checkups and screenings with the right health insurance coverage in place at reasonable costs is crucial for us at this time in our life.  So, understanding Medicare benefits pays in many ways. 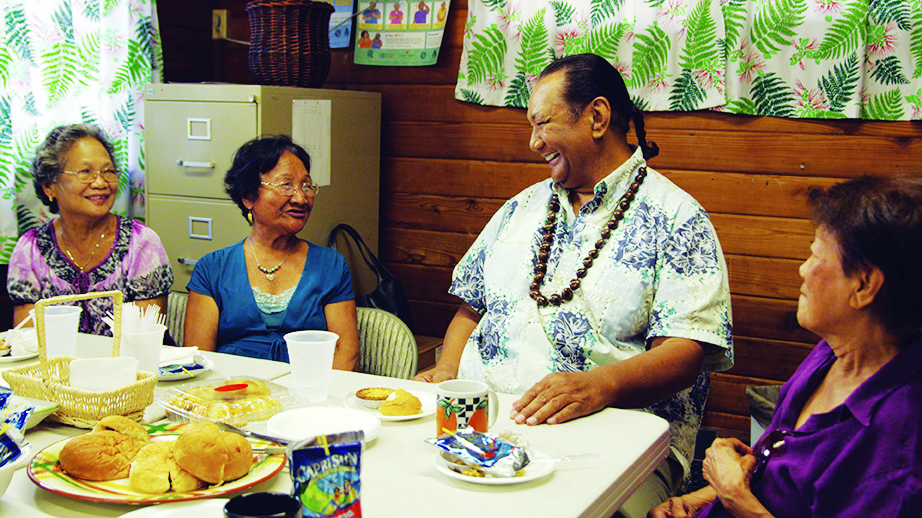 GM: Is that why you’ve become the spokesperson for AlohaCare?

AH: Yes! Partnering with AlohaCare has allowed me to share my message with my generation. When I was living in Los Angeles, I was diagnosed with prostate cancer. At that point, I was ready to just give up and check out of life. It was all very overwhelming. But I was blessed. I had someone in my life that helped me through the process. She met with my doctors and worked with them to figure out what kind of treatment I needed and what kind of health coverage I had. The combination of my employer coverage and Medicare made all the difference in making sure I had all the benefits I needed for a full recovery.

The whole process of health care can get complicated and can prevent people from getting help. My message is this — don’t wait until the unthinkable happens because when it does you won’t be able to think straight! Find a reliable source like Social Security, Medicare and your current or former insurance plan to give you the facts. Then, make your decisions based on those facts.

GM: How has partnering with AlohaCare allowed you to share your message?

AH: I’m a regular guest on a weekly radio show that provides seniors with important information on Medicare. It’s hosted by Martha Khlopin who is a Medicare expert. AlohaCare also has a team who conducts Medicare educational workshops for employers. Medicare is an important benefit that people like me who are still working at 65 or older can learn more about. I’ve worked all my life and continue to work. Many Medicare eligible workers don’t know you can continue to receive health insurance coverage from your employer and have Medicare as well.

Many of us are not aware that if you are age 65 or older, work for a company that has less than 20 employees, you may need to enroll in Medicare Part B or you may be subject to a penalty. You should talk to your Human Resources Benefits manager for more information. Having the right health coverage is extremely important especially if you have an unexpected health crisis.
There are so many seniors out there who need to know this. Years ago, when I was teaching at Punahou, one of the biggest rewards was when a student would get that look on their face and say, “Oh, I get it!” I guess you could say for me, I’ve come full circle. Today, one of the biggest rewards I get is when Martha and I meet with seniors and after sharing my story and help-
ing them to understand Medicare, they get that same look and say, “Oh, I get it!”

GM: What other advice do you want to share with others?

AH: Age is not indicative of energy or mental competency. Everyone should live life with a purpose. Now is the time when we can really make meaningful contributions within our community. As my friend and fellow senior Andy Rodrigues (owner of Andy’s Sandwiches and Smoothies in Manoa) says, “We can’t let our blessings ferment!” Even as we get older, we have to use our blessings to bless others. For me, that blessing is the gift of sharing vital knowledge to help our community.” As ku¯puna, it is our responsibility — our kuleana — to guide our young generation to see life is worth living and that there are many means
of support to help guide them along the way.

And that is what I love about working with AlohaCare. It is their all-encompassing care for keiki, the elderly and those who are struggling financially.

Not only do they want the people of Hawai‘i to have access to good health care but they also want them to be educated about good nutrition and exercise. 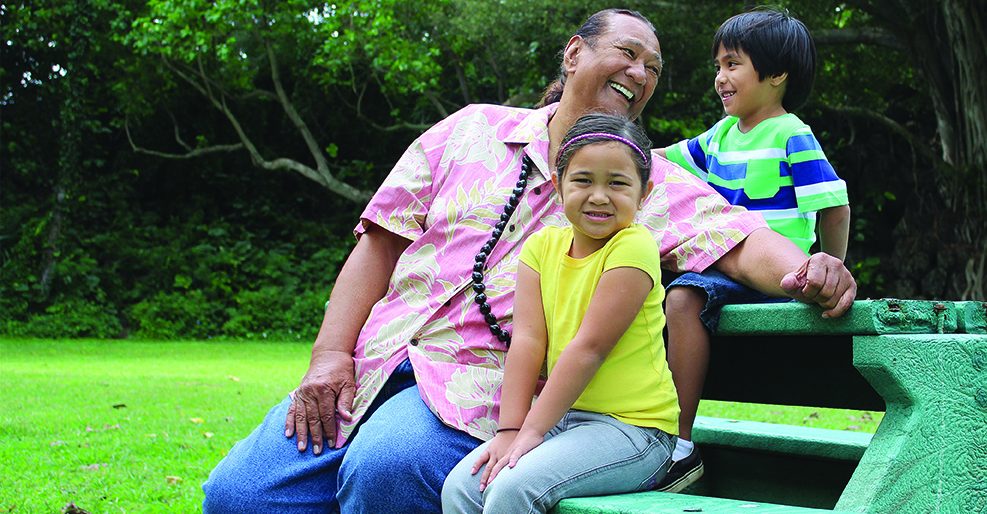 In addition to his work with AlohaCare, Al continues to make guest appearances on Hawai‘i Five-O and is an active board member of the (SCHAA) Sovereign Councils of the Hawaiian Homelands Assembly, the Boys and Girls Club of Hawai‘i’s NFL Youth Education Town (YET) Hawai‘i in Nanakuli, and the Hawai‘i Health Foundation.

AL HARRINGTON: Medicare In Your Working Years And Beyond 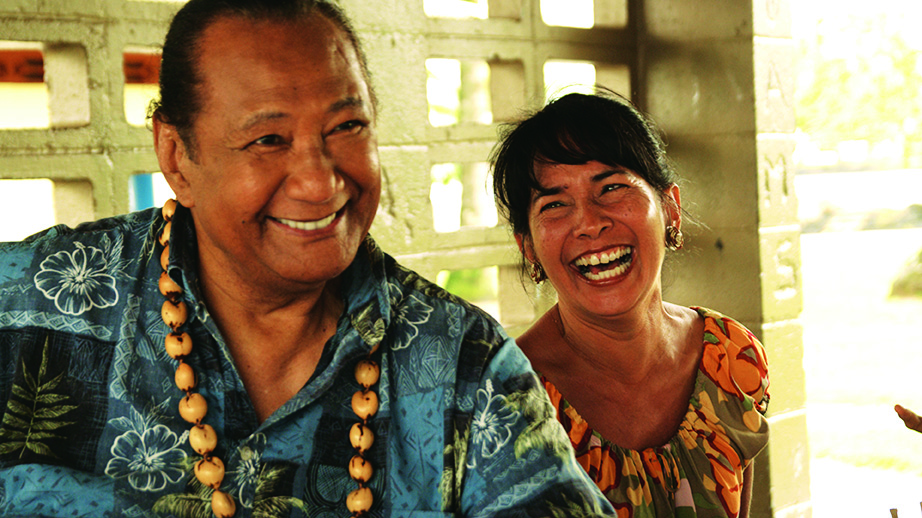 Al works with a team from AlohaCare. The team conducts educational workshops on how Medicare coordinates with employer health coverage. Here are some of the common questions from participants:

I just turned 65. I am still working and have health insurance coverage through my employer. Do I need to contact Medicare?

Everyone approaching 65 or older and still working should understand how their employer’s insurance coverage works with Medicare. There are specific rules for companies that employ less than 20 employees that may require enrollment in Medicare–Part B (coverage for doctor visits, labs). So before age 65, talk to your benefits manager, Social Security and Medicare.

What do you qualify for when you’re eligible?

Generally, people who qualify due to age start Medicare Part A (hospital coverage) at age 65. It is premium-free for most people. But, if you are still working and are covered by an employer plan, you may be able to opt-out and delay enrollment in Part B and Part D (prescription drug coverage). Your decision will depend on how your employer health coverage works with Medicare and whether both the employer medical and prescription drug coverage is “creditable,” or as good as Medicare’s.

How do you get a Medicare card?

For those who have chosen to receive Social Security benefits prior to age 65, you should get a Medicare card in the mail about three months before your birthday with enrollment information.

If you decided to delay enrollment when you turned 65, contact Social Security before you lose your existing coverage. You can also visit their website at www.ssa.gov to enroll online.