A Window of Opportunity 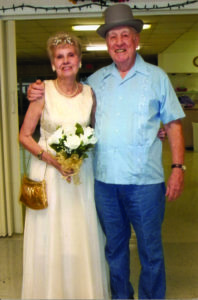 In the early hours of a chilly October morning, Rick donned his bomber jacket and hat, and stealthily snuck into the carport, his trusty shaving kit in hand. He quietly pushed his golf cart down the long gravel driveway before starting it, as to not wake his wife. The former Korean War pilot navigated back roads to the bank, where he withdrew $1,000. He tucked half of it into the lining of his hat for safe keeping. His family had said they were not going on their annual trip from Michigan to their winter home in Florida this year, so with quiet determination, he was leaving for warmer climes that very day, by himself, via golf cart. His “great escape” ended when the police spotted him and gave him a ride home.

What is most remarkable about this story is that Herbert “Rick” Maurice Key was 87 at the time of his attempted trek. He had lung cancer that had spread to his brain, causing dementia. He was receiving in-home hospice care and was not expected to live much longer.

“I had gotten calls for months saying, ‘Dad has gotten really bad. You better come quickly,’” says Denise, one of Rick and Wilma’s six children. “I was told that Dad was not eating and was not able to walk… ‘he can’t do anything.’ He was also seeing people and things no one else could see.”

But on the morning Denise arrived from Hawai‘i, her father had showered, shaved and dressed himself. He was excitedly awaiting his middle daughter’s visit so they could have breakfast together and talk story.

“We sat, ate breakfast and had a nice conversation,” says Denise. “He was quite coherent. Then he said, ‘Why are all those people going out the bedroom window?’ “When he would see things like that, I believe the veil between worlds had begun to fade for him.”

The tapestry of moments of lucidity intertwined with times of total incapacity can be confusing to those with a loved one with end-stage dementia. The contradictory behaviors give family caregivers and professionals alike the mistaken impression that the senior is either hopelessly helpless or completely capable.

“During the time I was there, we had profound conversations,” says Denise. “Age had softened his rough edges, which had melted into acceptance, opening the door to discussions that were previously impossible. My father was never one to share his emotions, like a lot of men of his generation.” Communication was deflective and abstract. “My father would take the truth and make a joke out of it. I left two months before he died, so I experienced firsthand the phenomenal things father was able to examine in his moments of clarity and the incredible physical abilities he had near the end of his life. I don’t understand it.”

That may be because paradoxical lucidity in dementia is a clinically significant, but understudied phenomenon. It has been widely observed that even as confusion and memory loss escalate during the end stages of dementia, there’s often a welcome reprieve that occurs. Paradoxical lucidity signifies a sudden, short-term regaining of clarity near the end of a dementia sufferers life. For family members, it is a welcomed reprieve and a gift to be cherished. Although it is not indicative of health improvement, this temporary clarity presents a precious opportunity to reconnect. It offers the opportunity for meaningful reminiscing, and sharing of feelings and thoughts. But the same mysterious force that opens the door for poignant conversation can also enable the dementia sufferer to try to accomplish the incredibly dangerous, like Rick’s escape attempt.

“Join them in their world during the different states of consciousness they experience,” Denise advises. “But enjoy these tiny windows of connection that close too quickly — savor those last sparks of connectedness.”