The Genteel Sport of Lawn Bowling 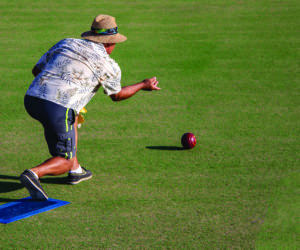 While the sport of pickleball has swept across Hawai‘i, there’s another game that has been enjoyed by seniors for a much longer time but often goes unnoticed. Lawn bowling is a genteel sport particularly liked by seniors because it demands little physicality.

In Hawai‘i, the only organized lawn bowling club is on O‘ahu at Ala Moana Regional Park. A lawn bowling “green” was incorporated into the original design of the park in 1937. The first club was established in 1939 and the game has been played at that location ever since.

Lawn bowling is similar to bocce ball (also called “Italian lawn bowling”), with a few differences. Lawn bowling players roll a “bowl” (not a ball) at a marker ball (the jack) on the other side of the playing green. There are more rule details, but basically, you try to roll your bowls as close to the jack as possible.

The game can be played in singles, doubles, triples formats or with four players on each side. Games generally last one to two hours. The bowls come in different sizes to match players’ hand sizes. Each bowl weighs about 3.5 pounds. Unlike a round bocce ball, the lawn bowl is not spherical, but weighted on one side so that it “hooks” to the right or left after it is thrown.

Expert players use that hook to finesse their way closest to the jack in order to score points.

As for exercise, lawn bowling is considered to be a low-impact, therapeutic exercise that can improve fitness, coordination and confidence. It’s particularly appealing to seniors because of its ease of play, although an increasing number of young people are taking up the sport.

If you’re interested in joining a team or just want to give it a try, contact the club.