Home is Where the Heart Is

Throughout our lives, we can call a variety of places home. For me, one of those places was my grandmother’s house. I’ve been going  in and out of her house since I was a baby. I knew every inch of my grandmother’s house, like which rooms had the best hiding spots or which drawers held my grandma’s fancy scarves. 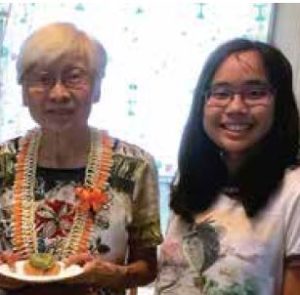 Despite living in Waipahu, I attended the schools in Pearl City, which was where my grandmother’s home was. Every morning, my sister and I would be dropped off at my grandma’s and be driven to school by one of my grandparents. We’d often play board games together, like cribbage or Chinese checkers, while awaiting the ride to school. In my intermediate and high school years, I walked to and from school from my grandmother’s house with my sister and cousins. After school, there would always be popsicles in the freezer and my grandma would be waiting for  us while enjoying one of her 1,000-piece puzzles. If we were lucky, her homemade cucumber kimchi was waiting for us, too.

Then in November 2014, my grandmother was diagnosed with Parkinson’s disease. Parkinson’s disease is a  neurodegenerative disorder that affects a person’s motor skills and the production of dopamine in the brain. The initial years following her diagnosis were relatively normal. But after my grandfather passed away, my grandmother lived alone and her Parkinson’s slowly got worse. After several incidents of my grandma falling while alone at home, my family decided to get caregivers to help watch over her during the day. However, as her Parkinson’s progressed, it became clear that my grandmother needed 24-hour care. Keeping up her home was becoming a stressor for her and my family, as well.

After many discussions with my grandmother, the decision was made to move her into a care home. So, last October, my grandmother and I said goodbye to the house that she had lived in for 56 years. For the last time, she sat outside and looked out at her neighborhood like she had done everyday. It was sad to see her being driven away from the place that I had always thought she’d be. It was strange to think about another family playing in the yard and using the scarf drawer for something else.

My grandmother hadn’t outwardly expressed any sadness about the move, but sometimes due to her Parkinson’s-related dementia, she still forgets that she cannot go back to her old home. It’s hard to remind her why, but in the end, it was her decision, because she trusted the family to do what was best for her.

While there is something so sad about losing a place you called home, truly, it was my grandmother who made that house special. My grandmother is still around to make more memories and to carry that home with her wherever she lives. In a way, we never lost that place we called home because it’s really true, that home is where the heart is.