A Second Chance at Love 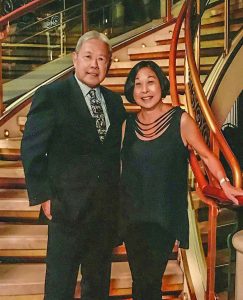 Sharon Young and Jim Nishimoto first met in 1989. They were in their 40s, working together at Group 70 International Inc., a local planning and architectural firm. Sharon was a single mom with three children. Jim was happily married to Gail and the father of two children.

Sharon was widowed at the young age of 33 after caring for her husband at home for over two years. Mike passed away in 1982, leaving her to raise her children alone while working fulltime — sometimes at multiple jobs.

Jim served as the president/chief operating officer of the architectural firm, and later as the vice chairman. But in 2010, he left to become the full-time caregiver for his wife, who began to exhibit signs of dementia. He felt that he wouldn’t be able to devote the necessary time and attention to his work with his wife at home under someone else’s care. Gail passed away in early 2016.

In late 2016, Jim’s thoughts turned to his former Group 70 workmate, Sharon. Wondering if she had married again, memories of their previous friendship propelled him forward.

Jim began asking former office colleagues and friends about Sharon, trying to track down her whereabouts. Finally, he followed a lead to a last known residence. He took a chance. He drove to the address and left a business card in the mailbox. On the card, he asked if she would call him.

“She took some time to respond,” says Jim. Apparently, Sharon had her own questions about him, consulting with friends and former coworkers. “She responded only after finding out that Gail had passed away.”

When Sharon finally responded, they met for dinner.

While they were caretakers, they missed out on many opportunities. Being widowed left a strong desire to enjoy life to the fullest. They decided they did not want life to pass them by without enjoying each other’s company for as long as possible.

Both nearing age 70, they were married the following year with the blessings of their friends, children and grandchildren.

“It is always better to enjoy life with someone — someone special,” they said.

Their bond is their shared love of family, music, the arts, travel, and more importantly, their shared love of the Lord. At their wedding, Pastor Francis Oda said their marriage “was made in heaven.” Jim says “their marriage happened because of heaven.” They both believe that it is the Lord who brought them together after all those years — for a second chance at love.