Green Point Nurseries: A Growing Business on the Big Island

Harold Tanouye started the beginnings of Green Point Nurseries in 1957, when Hilo’s economy had not yet recovered from the impacts of WWII. Residents were moving away due to lack of work.

Harold wanted to live in his hometown, but needed employment. He recognized a demand for anthuriums, which military personnel and civilians were sending home during the war.

Although growing anthuriums in Hilo may have been only a part-time, backyard-type industry back then, Harold soon realized this was going to be his life’s work.

As a teenager, Harold got the opportunity to go to Grinnell College in Iowa. He worked summer jobs on local farms in the Midwestern heat. 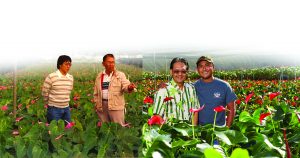 “He was a small Asian guy, so the farmers would task him with cleaning the inside of the silos,” says Eric, Harold’s oldest son. “They give the new kids that job. It was easily over 100 degrees inside the silos. He joked about it a lot.”

Even so, Harold said his time in the Midwest was one of the best experiences of his life.

He returned to Hawai‘i and raised four children — two boys and two girls — with his wife. “But he never lost his Midwest values and customs,” says Eric. “He brought us up that way.”

“We all grew up on the farm,” says Eric. “Like most farm kids, when our friends were going to the bowling alley or going fishing, we had to work. We all grew up with responsibilities.”

Eric and Lolita Tanouye have three sons. Their two older boys, Christopher and Jonathan, have joined Eric in the family business, the third generation to do so. Their youngest son Mark is currently studying horticulture at the University of Hawai‘i at Mānoa as a graduate student at the College of Tropical Agriculture and Human Resources. He will join the family business soon.

A budding fourth generation may work in the family business down the road. Oldest son Chris and his wife Jeribie have two sons — Ethan, almost 3, and Oscar, 6 months old. Second son Jonathan and his wife Remi recently brought that generation’s first girl into the family fold. Makenna is about 10 months old. “As soon as they can walk, we put them to work,” Eric joked, referring to the family’s ingrained work ethic.

Although Harold learned old-school values while in the Midwest, he didn’t attribute that way of thinking and living to the location, but to a bygone era. “Those values are in line with the mother country’s values during that time,” Eric says. His father was a third-generation descendant of Japanese immigrants.

Eric iterated his father’s list of old-school ideals: “Go to sleep early, get up early, work hard, do the best you can at your job, don’t complain, save money for a rainy day, respect your elders and never talk back. Help the less fortunate. Share what you have with others. Be community-minded. Don’t say anything bad about others. Compliment others; never boast. Be courteous to women and elders. Make sure they are taken care of.”

“In high school, we didn’t cut the boys loose,” says Eric. “They probably didn’t like it, but every summer, they worked in the nursery. We exposed them to working with our employees and learning tasks from the ground up. They learned humility. They learned everything from the simple-skill jobs to running their own crews. They got exposed to different types of responsibilities and it gave them some self-confidence early on.”

While attending college, each son ran his own Saturday morning farmer’s market supplied with Green Point flowers, foliage and other nursery products. Chris attended the University of Hawai‘i on O‘ahu and ran a market at Kapi‘olani Community College. Jon had a booth at Kino‘ole Farmers Market while attending UH-Hilo.

“They had to learn a lot about the family business because people would ask them all kinds of questions,” says Eric. “Most farm kids are a little bashful and quiet. They had to come out of their shell. It taught them to speak clearly and with confidence.” They also realized they had to be on their best behavior, and had to carry themselves well as representatives of the family and the family business. “I’m glad they got that opportunity to learn what we do here every week,” says Eric.

“My first mentor was my father,” says Eric. “Now deceased, he left a lasting imprint. Now our focus is to train our next generation to carry on the legacy of their grandfather.”