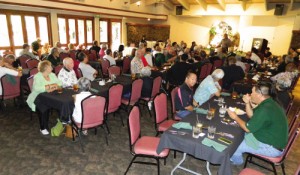 The 2015 season for the Na Koa Football Club started on Aug. 31 and will continue every Monday for 11 more lunches at the Willows Restaurant, starting at 11am. This season, the University of Hawai‘i Rainbow Warriors will play 12 straight games without a week off. There is no bye for Na Koa boosters either. Coach Norm Chow kicked off their first lunch meeting to a round of applause as he announced, “This is the best football team in the three years I have been at UH.” He beamed as he talked about his players’ and coaches’ stats, noting his admiration for each one.

Coach Norm Chow speaks at the first luncheon of the season.

I noticed that women made up one-third of the audience; some with their husbands, but many alone or with a girlfriend. All listened intently to Coach, tracking every question and answer. One woman told Coach that although the stands may not always be filled, Na Koa boosters, UH fans and alums continue to support him, his staff and players. Coach thanked her and said he would take that message back to his staff and players. I caught him after lunch and asked, “Why do you think one-third of today’s meeting were women?” He grinned, “Women enjoy football!”

After lunch, I met Dana Chandler, the ultimate Rainbow Warrior booster — with season tickets for every UH sport. She’s a Cal Poly graduate, who calls Hawai‘i her home now for 35 years. She joined Na Koa to help our student athletes. Bea Shimamoto is a UH alumna who loves football and men/women’s volleyball. She can’t make all the Na Koa lunches because she attends every away game and stays to vacation. Bea broke into a big smile when I mentioned the November UNLV game. She’ll be there. Maybe you will, too! 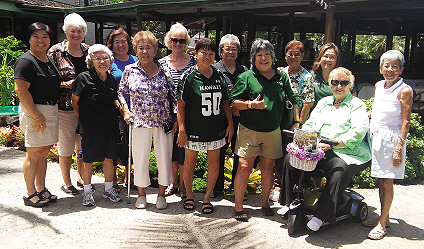 Both women see the educational aspect of football, preparing young men for leadership, career and raising a family. They relate to Coach Chow because of his positive attitude, family-oriented coaching method and teaching skills. He is a great spokesperson for UH because he deeply appreciates his staff, his players and their families. In return, Coach Chow and his program enjoy the enthusiastic support of 550 members of Na Koa Football Club. As he says,

“For over 25 years, Na Koa is a large part of the UH Football tradition; their support is critical to the program’s continued success, both on and off the field of play.”