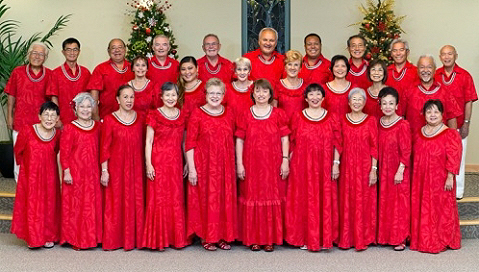 Voices of Aloha is the quintessential community choir in that most are average singers representing a cross-section of the multi-generational, cultural, racial, and religious tapestry that is Hawai’i, singing songs the community loves. Their repertoire includes classical favorites as well as original arrangements by Mark Yasuhara of Broadway and popular tunes, patriotic anthems, and of course, the songs of the people of Hawai’i.

Yasuhara says choral singing is one of the best low-impact activities for seniors. Full-voiced singing incorporates deep, core breathing, good posture and physical coordination. Learning and performing the music challenges and focuses the mind and creates natural and easy social interaction. Unlike karaoke, choral singing encourages cooperation, support and blending with other singers. Voices of Aloha members say rehearsals are stimulating, invigorating, happy affairs, a highlight of their week.

The choir perform at civic and private functions, churches, retirement centers and nursing homes. Recently, they performed at the annual Senior Classic Games at Halawa Gym coordinated by Garrett Iwai for their 25th anniversary. The Games were created in 1989 by, then, recreational director, Herb Yasuhara, Mark’s uncle. Herb was recognized and Voices of Aloha opened the Games with a half-hour concert in his honor, concluding with the singing of “The Star Spangled Banner” and “Hawai’i Pono’i.”

All ages are welcome. The group primarily consists of seniors, including a few octogenarians. They welcome, without audition, anyone who enjoys choral singing. Since many are not music readers, rehearsal CD’s are provided and director Mark Yasuhara offers a music-reading seminar in July. Most everyone who joined as a non-music reader can, at least now, follow the notes.

Voices of Aloha meet every Tuesday at 7 pm in the Annex of the Community of Christ Church at 1666 Mott-Smith Dr. in Makiki, one block makai of Roosevelt High School, from September through May. 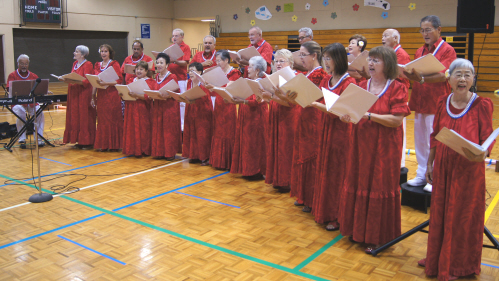 Performance at the The City & County of Honolulu’s Parks and Recreations’ 25th Annual Senior Classic Games 2014.