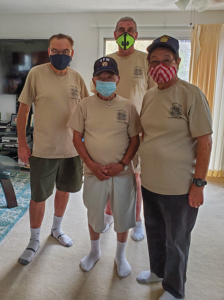 The call came in. “Help! Papa needs an ADA compliant bathroom.” According to Adele, his granddaughter, “Papa refuses to come downstairs to shower because he says he already has a blankly-blank shower upstairs.” Jim “Papa” Raynor is a 98½-year-old WWII veteran.

Upon receipt of the call, four members of VFW Post 10276 went to the house, made a list of equipment needed, measured, went to the hardware store and were back on the job within two hours with their tools and supplies.

Four hours later, the grab bars and the rest of the equipment were installed and their comrade took an inaugural shower to break it in.

Joining the work crew downstairs in the kitchen, Jim thanked them for their efforts and then cussed them out for working so fast. “I wanted to spend a few more hours talking story about the old days that only veterans would understand.” So
post Cmdr. Steve Mortimer called the post chaplain, who scheduled weekly wellness calls.