One would expect that an effective treatment for Alzheimer’s disease (AD) would be  pharmacological. And yet, 99 percent of AD drug trials fail. The last time the FDA approved an AD drug was 2003.

Acupuncturists might focus on neuroregeneration using neuroacupuncture. In a similar fashion, a new modality — photobiomodulation (PBM) — has been building its case as a credible treatment alternative for AD. Rather than targeting a single biological mechanism, it helps the brain repair itself. 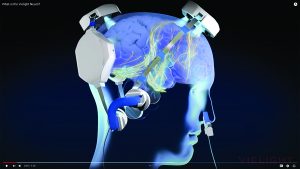 Photobiomodulation uses near-infrared light to stimulate, heal, regenerate and protect brain cells and tissues that have been injured, are degenerating or are at risk of dying. A high-quality PBM device sends photons of light through the skull, stimulating brain cells to increase metabolic energy, and increase cerebral blood flow and neuroconnectivity.

Many studies have used  photobiomodulation for cognitive decline and dementia/AD. Currently, there is a large clinical trial being run at eight sites across North America.

Using light is easy. It’s noninvasive and unlike medication, it is able to affect multiple neural pathways, which may make it an elegant solution to a very complex problem.