The fervent spirit of University of Hawai‘i football during the era of Coach Dick Tomey (1977–86) is captured in a new book, Rise of the Rainbow Warriors: Ten Unforgettable Years of Hawai‘i Football, scheduled for release in late October. It was a time when UH was new to the Western Athletic Conference and loyal fans regularly filled Aloha Stadium.

“UH fans will enjoy the book because of the behind-the-scenes stories Coach Tomey and his players share,” Tominaga said.

Coach Tomey spoke with Generations Magazine from his home in Arizona: 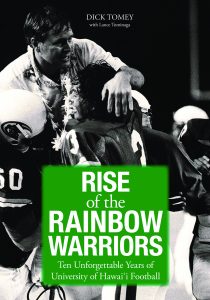 GM: What was it like reconnecting with more than 150 former UH football players?

Tomey: It was amazing. That chapter is one of my favorites. To reconnect over a subject that is dear to their hearts was invigorating. It was so gratifying to hear about their impact on society. Readers will enjoy reading about what they are up to.

GM: What else in the book might longtime UH fans find interesting?

Tomey: The first season, described in detail, is important in how everything started. I was appointed coach and took the job in June 1977—not optimal for a season that started in September. The team didn’t have time to practice and was coming off a rough season. I didn’t have time to recruit many players and select a coaching staff. And I was a young, new coach with no reputation taking on a difficult job. Expectations were low.

GM: How are past football fans different from today’s generation?

Tomey: It’s more difficult for UH today because we can sit in our homes and watch 10 games on TV on Saturdays. In those days, it really didn’t matter who we played or whether we won or lost the previous week. The fans were there, they stayed late and their enthusiasm was boundless. We all could feel the energy and fed off of it.

GM: What else have you been up to lately?

Tomey: My wife, Nanci Kincaid, and I live in
Tucson. We have four adult children and eight grandchildren. We’re just Papa and Tutu. We’re blessed with good health. I’m going to be 80 years old next summer.

Tomey is planning to visit Honolulu in October for book signings and public appearances. Details are available at www.bookshawaii.net.