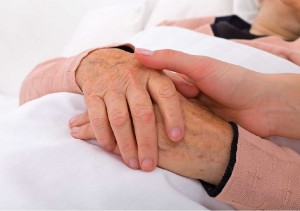 Arlene’s mother’s last breath was soft and peaceful. Arlene welled up and sobbed — not entirely from sadness, but also from release. She had done all she could do. She had honored mom’s wishes and here they were, alone at Arlene’s home on O‘ahu; Mom’s pain and frustration were over.

Arlene texted her family. They were all here last week, so there wasn’t much to say. The last family gathering was part of mom’s plan for peace and no regrets. Everyone said what they needed to say. Now the nurse from Islands Hospice was gently preparing mom for transport to the mortuary. It was surreal, but Arlene was at peace too.

Over twenty years ago, Janet had instructed her children in her belief that people do not have to suffer at the end of their lives. Every couple of years she would bring up the conversation. Arlene could hear her now, “We don’t let our pets suffer at the end of their lives; I want you to show me that same compassion. Help me die with dignity, in my own bed.” Janet told her daughter that her greatest fear was the burden of being dependent on others for her personal care. As Arlene got older she understood that if her mom got sick and could not get better, she would choose when to die, and Arlene would help her pass peacefully.

Janet was living a full life as professional educator, living independently and serving on her church board when the stroke came. Suddenly, she was paraplegic, incontinent, aphasic and very dependent. She tried rehabilitation, but after three months, all she recovered was control of her facial muscles. She still could not say what she was thinking, but with great difficulty, she spelled out a message to Arlene, by feebly pointing to one letter at a time. Janet had the financial means to pay for her continued care, but she was done suffering and being completely dependent.

Arlene would never have been able to guess her mother’s wishes. But Janet had trained her for this moment. Without breaking any laws, Janet would purposely refuse nourishment, and Arlene would not intervene, but honor her decision and keep her comfortable at home. Years ago, the whole family agreed to Janet’s “compassionate choice,” if she became bedridden and dependent.

After Janet was transported to Arlene’s home, the family came together for their farewells. It was a peaceful time and with its own joys. When Janet indicated that she was done “entertaining,” the family left. Her focus turned to passing. Our bodies can live for months without food, but only a few days without liquids. Paralyzed parts of Janet’s body were in pain, and hospice treated the pain to keep her comfortable. In a few days, Janet was done being “conscious” and gave in to sleep. Her resolve never waivered. Arlene was able to be a good daughter and support her mother’s plan: to die peacefully at home, with dignity.