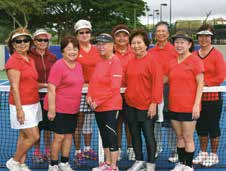 Like the challenges of aging well, playing tennis at a mature age provides its own set of character trials and physical tests.

Of the almost one million tennis players in the U.S., about 2,000 compete annually in the USTA League 65 and Over Tennis National Championships. In December, over 100 “super seniors” from Hawai‘i Island, Maui and O‘ahu met at the Patsy T. Mink Central Oahu Regional Park in Waipio to compete in the 65 and over section championship playoffs. Ten teams competed at 6.0, 7.0 and 8.0 skill levels. 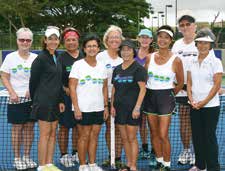 Ask any of one of these players, who range in age between 65 and 90, and you’ll hear how tennis keeps them fit and happy.

“Tennis keeps us alive,” said Maui Magic Captain Jane Sakakihara, who also serves as a Maui tennis league coordinator. “It keeps us active and around friends.” She plays tennis three to four times a week with friends she’s been playing with for, well, years and years. 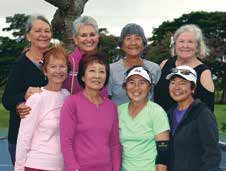 Tennis is a low-impact game that can be played at all levels and ages at every stage of life.

It’s never too late to take up the game. The adaptable human body can be trained and improved at any stage of life.

“You gotta be brave to face the challenges of aging and playing tennis well,” Sakakihara said “Just step up, take deep breath and swing.”

To learn more about the USTA, visit
www.USTA.com