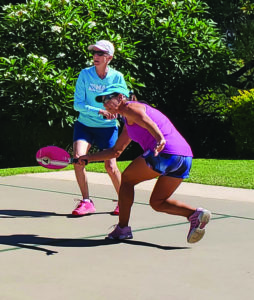 Beginning players love the game immediately, because it is easy to learn, once you master the somewhat unconventional scorekeeping method. It’s fun at any skill level, providing exercise and social interaction, even during the pandemic.

“I give lessons to local and visiting players; the majority are seniors,” says Laurie Loney, one of Maui’s four USA Pickleball ambassadors. “They have fun immediately! Most become hooked instantly and recruit their friends to join in.”

Ambassadors like Laurie are volunteer representatives and unofficial spokespersons for USA Pickleball who promote goodwill and help grow the sport in their area.

Laurie, a senior player, instructor and state gold medalist, estimates that about 80 percent of Maui’s 500-plus players are over 50, adding that the under-50 age group is also growing quickly.

“The latest numbers show that Hawai‘i’s over- 50 players comprise about 70 percent of total players in the state,” says Jack Hodges of Kaua‘i, the state’s USA Pickleball ambassador. “We also have a very large group of under-50 players and a large group of players over age 70 on Kaua‘i, as well.” Laurie, who has had her own court for 18 years, says there were several private courts in South Maui back in the ’70s and ’80s. Since popularity of the game has increased at such a fast rate, players have commandeered existing tennis and basketball courts, awaiting designated, county -built pickleball courts. Private tennis clubs, such as Kapalua, Royal Lahaina, Wailea and the Maui Country Club, are accommodating pickleball play. There are also dedicated county courts at Waipuilani and Lahaina Civic. “But the current public facilities are becoming overwhelmed,” says Laurie. “The need for more courts is great.”

Especially after COVID-19 restrictions were put in place, many pickleball fans are also playing in their driveways, neighborhood cul-de-sacs or condo parking lots. Some are even building their own 20-by-44-foot cement or asphalt courts on their private property.

Looking for a game? Visit www.places2play.org or download the USA Pickleball Places2Play app.