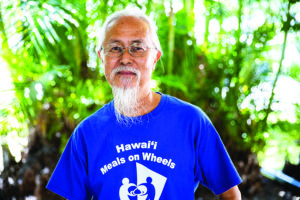 Doug Matsuoka started working at Hawaii Meals on Wheels (HMOW) seven years ago as a part-time delivery driver. But his previous computer experience opened the door to his current job as the IT (information technology) and digital media coordinator, and “YouTube guy.”

He was an early adopter of computer technology, building his own microcomputer from a kit in the early 1980s. Doug learned his trade through various jobs.

Doug worked as the director of technology for the Honolulu Board of Realtors for six years before coming to HMOW. As the years passed, Doug became aware of a growing chasm between his personal ideology and the goals of a real estate organization that grew more prosperous while homes became further out of reach for an increasing number of would-be owners. This crisis of conscience prompted Doug to quit his well-paying job.

He left at age 57. His father died at 60, so assuming he may face the same fate, he wanted to spend his remaining time immersed in political activism — a socially conscious decision not based on dollar signs. He soon expended his savings and found himself homeless.

“The problem, if I can call it a problem, was that I lived longer than my dad did,” Doug says.

But it was through this political activism that he got to know the now-former executive director of HMOW, who eventually offered him a job.

“I am not making the money that I once did, but I get to do what is beneficial to the community,” he said. “It is important how you make a living and I finally understand that completely now. It’s the best job I’ve ever had.”

Pre-pandemic, about 500 HMOW volunteers — most of them seniors — delivered hot meals every day. “That’s what seniors do when their work obligations are finished… they still want to serve their community,” says Doug. However, now more meals are delivered by staff members rather than senior volunteers, due to safety concerns.

Doug says that even though he and the seniors he knows have a lot to offer, when people talk about the Silver Tsunami, many think of older people only as consumers of social services. “It’s interesting getting older, because you age into a unique form of discrimination. Day by day, you start becoming aware of microaggressions — indirect, subtle, unintentional discrimination.”

“People worry about meeting the demands of our growing older population, when actually, a lot of the older people are economically productive and serving the community,” says Doug. “Seniors run nonprofits, businesses… including the man who holds the highest office in the country.”

Even so, seniors are often stereotyped. “Their biggest threat is their stereotype threat — the risk of conforming to the stereotype,” says Doug.

Doug will soon be 69. “Old guys like me are not conforming to the stereotype. We are doing what we can in the community,” says Doug. “I am not alone. There are many my age and older who are social service providers, not consumers. I wish that was the senior stereotype: productive people who are a resource for the community.”

Their professional experience and life perspectives continue to sculpt seniors into one of society’s most valuable resources.