Norm Chow reflects on his first year on the field. 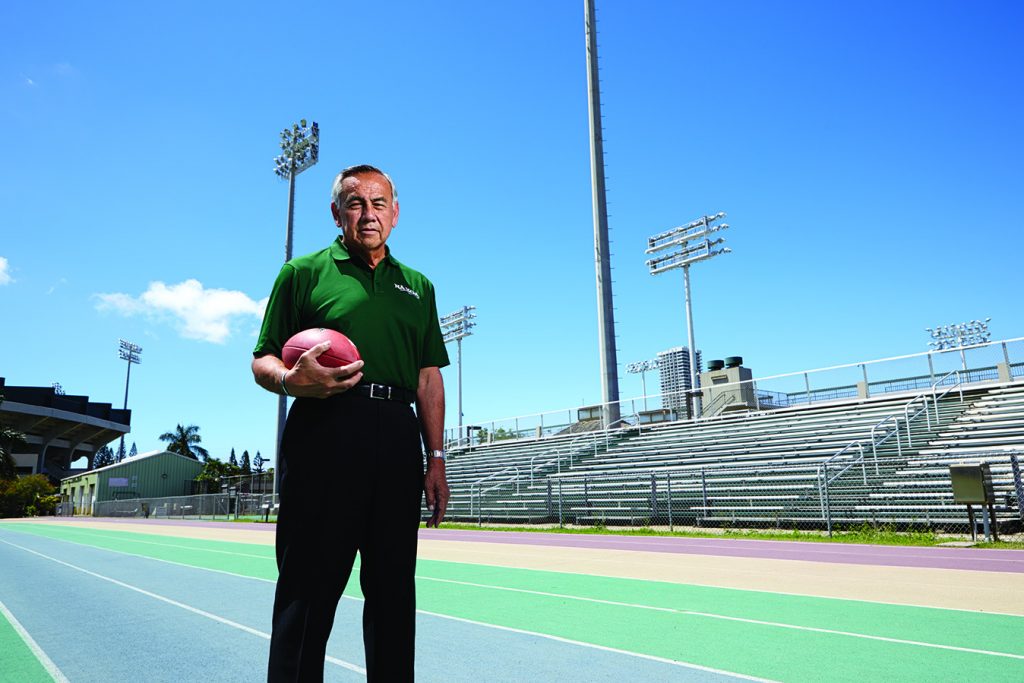 “I always tell the kids, We stand on the shoulders of the great men and women that have gone on before us.”

By most reports, 62 is now the most common retirement age by far. Yet, many folks are adjusting to the poor economy and retiring later at 65 or older. Then there’s Norm Chow…

In late 2011, at the ripe retirement age of 65, when most people would be counting down the days to senior benefits, Chow agreed to a five-year deal for his first collegiate head coaching job as the University of Hawai‘i’s 22nd head football coach.

The Punahou School alum and Palolo Valley native succeeds Greg McMackin, who retired after four seasons as head coach of the Warriors. Chow is the first Asian-American head coach of a major college football program. 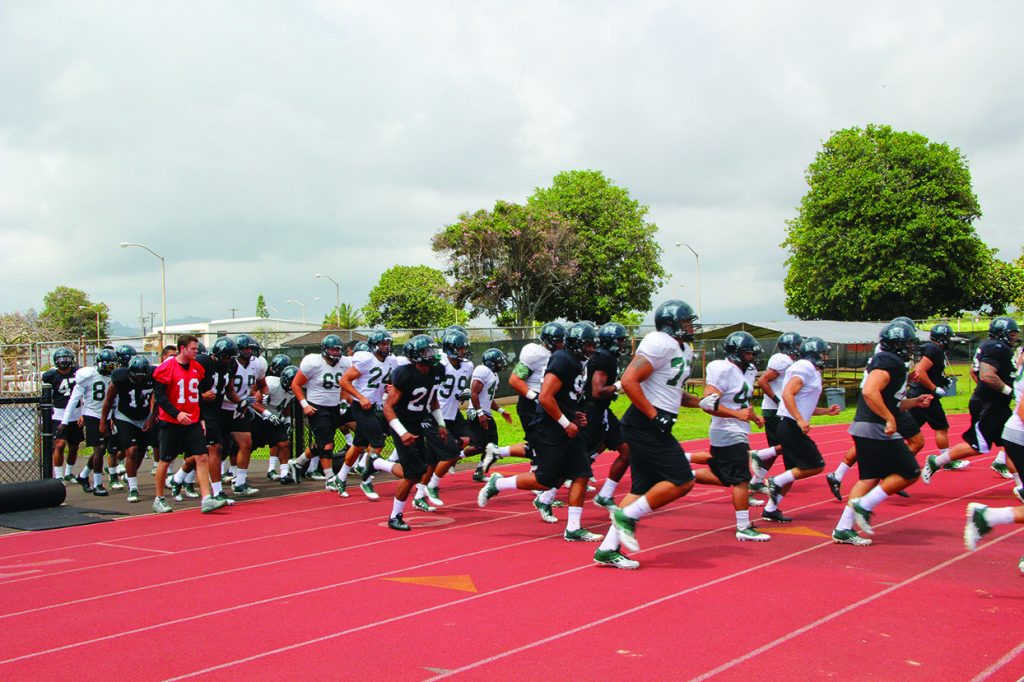 Starting over with a new job in a new state with a new team wasn’t perhaps the ideal scenario, but it was one for which Chow was ready.

He was ready to return to his native state and he was prepared to support Hawai‘i’s home team. Chow admits that when UH was looking for a new head coach, he already had a job and didn’t have much interest. But after the first interview, he says he realized how important the football program is to Hawai‘i. “It’s the only game in town, only one team … and people want to rally around this program,” he says. “Everyone understands how important our football program is to Hawai‘i, and we just need unconditional support from our alumni and the community. Our kids are trying so hard and we need the support. It’s all about supporting the kids!”

Working For A Living

Beyond given an opportunity to coach in Hawai‘i, Chow is “staying in the game” because he enjoys “supporting the kids of the future” and his role as coach. And he’s not alone. The Sloan Center on Aging and Work, for example, cites data showing that nine of 10 older workers enjoy their jobs. And why not? Many of us— like Chow — work a lifetime to learn the skills and gain the recognition to hold our hard-earned job titles.

Chow’s first coaching job was as the head coach at Waialua High, Oahu, from 1970 –72. He then began his 27-year stint at Brigham Young University (BYU), serving in a variety of coaching and recruiting capacities. One of the major features of head coaching in college football is the high turnover rate for jobs. College coaches routinely change jobs, rarely staying at a school for more than a decade. Yet Chow remained with BYU for nearly three decades. “I stayed at BYU because my wife Diane and I wanted to raise our children in a normal environment,” Chow explains. “Coaching doesn’t lead to a very normal lifestyle, as you know. We made a commitment that all four of our children would attend the same elementary and high schools.” 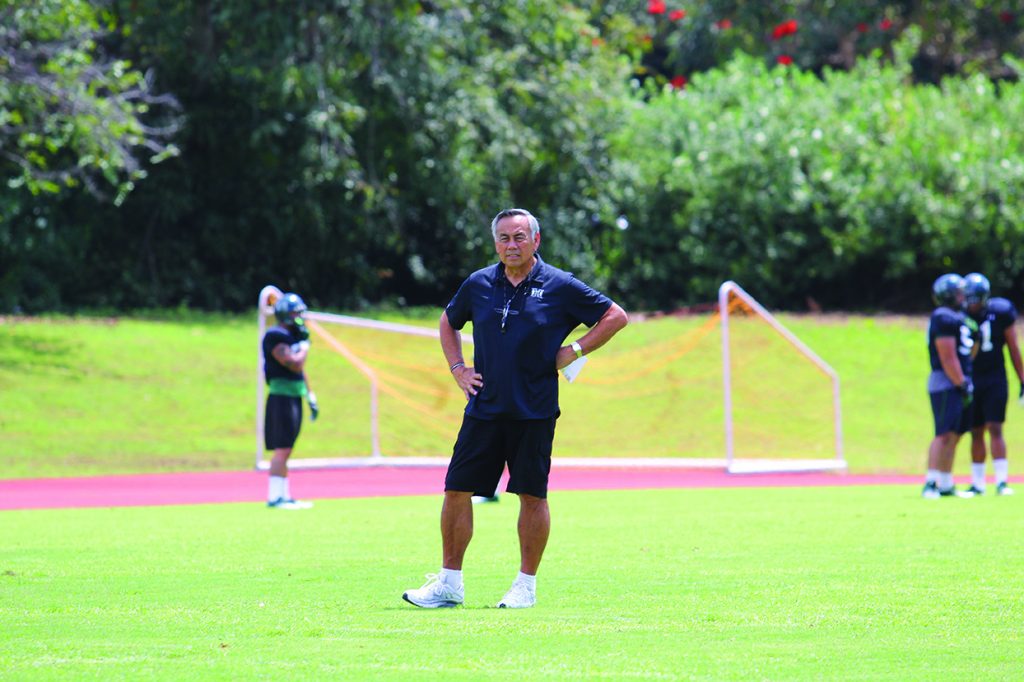 “My father instilled the hard work ethic and [encouraged us] to make something of ourselves,”

The national median age is 50 for college football head coaches in the National Collegiate Athletic Association (NCAA) Division I Football Bowl Subdivision (I FBS). Yet Chow says being an older coach doesn’t hold him back. Rather, by working with student athletes in a college atmosphere he “tries to stay young with the kids.” He says, “I still have the adrenaline going, the challenges to compete. I’m 67 now and still enjoy the wins and I still don’t enjoy the losses … but nothing beats a Saturday afternoon football game.”

Considered one of the top offensive coaches in collegiate football history, Chow works hard and expects the same of his staff.

When first hired at UH, Chow set the tone during his introductory press conference, “I’m 65 years old. I’ll out-work any of you. We will have the hardest working coaching staff around. Without question. They will not be hired, if they are not willing to go to work.”

Many of his values, Chow says, come from his upbringing. “My father instilled the hard work ethic and [encouraged us] to make something of ourselves,” he recalls. “We got up early at 5 a.m., ate breakfast and went to school.”

He expects commitment from his players as well. Unlike head coaches at other levels, college coaching staffs are solely responsible for the composition and development of players on the team. The ability to recruit and develop top players plays a major role in a college team’s success.

Chow’s former players can attest to that. “[With Norm as head coach], UH will be an extremely hard-working team that’s well prepared,” says Carson Palmer, Oakland Raiders quarterback, Heisman Trophy Winner and former USC quarterback. “He will focus on winning, education and just bettering the young kids that he’s tutoring.”†

After 13 years of the Run-and-Shoot Offense scheme that was installed by former Head Coach June Jones, Chow has implemented a Pro Style Offense scheme, which is more complex than typical college offenses and resembles those predominantly used at the NFL professional level.

Another major change was a switch in conferences. The UH team was a part of the Western Athletic Conference until July 2012, when the team joined the Mountain West Conference (MWC). 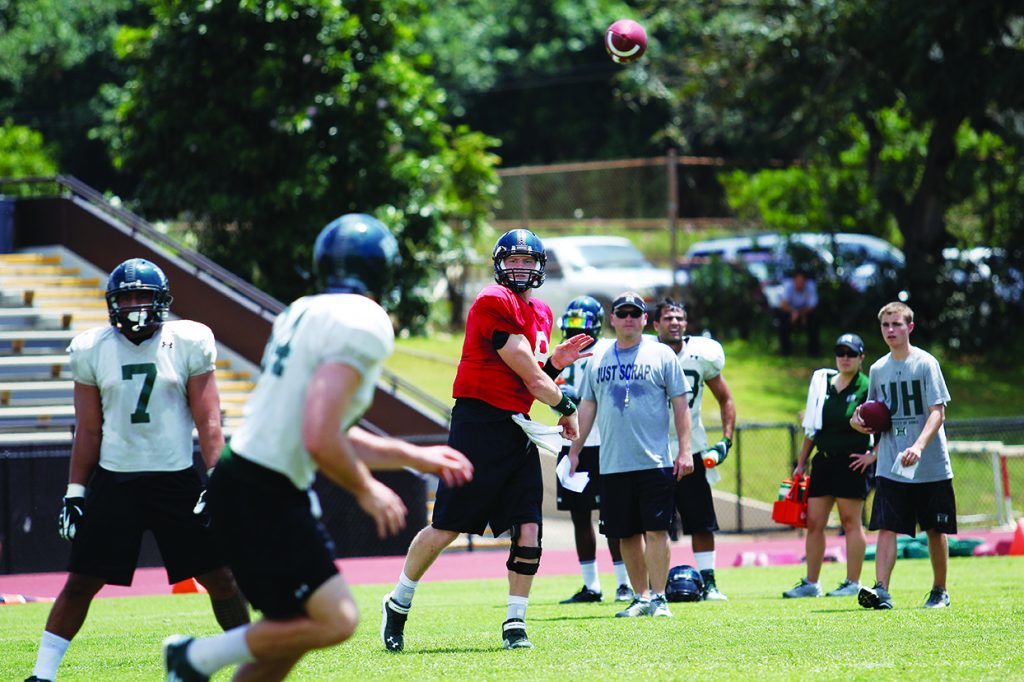 As first-year MWC members, the team finished the season 3–9 overall, 1–7 in the MWC to finish in a tie for ninth place.

“It was to so hard last year to see the losses in the locker room and see the hurt in our kids’ eyes. It has been hard,” Chow admits. “But we didn’t quit and fought hard last year. You know, we played a tremendously difficult schedule. We didn’t play that easy money game like most Division I schools.

“And we will not shy away from the challenge. We need to play better, smarter football this year. We just need to use better schemes. People today are not patient, so we need to get it going.”

Part of “getting it going” is Chow’s focus on recruiting, which includes keeping top local recruits in Hawai‘i. In this respect, Chow has had to change his recruiting pitch. For years as a Mainland coach and recruiter, he worked to convince local kids to leave Hawai‘i. Now he’s asking them to stay home and to make us proud. “I tell them, You can play good football here in Hawai‘i — just like on the Mainland. Plus, you will get a good education here at UH.”

Trevor Mattich, former BYU offensive lineman and ESPN analyst agrees. “[At BYU] I knew then that our talent was always maximized and no matter what happened, our guys were in a position to win. Off the field though, he’s even a better fit because he’s from Honolulu and knowing the family values of the Polynesian culture is critical. He understands that.”†

But coming home after 40 years of living and working on the Mainland was hard at times. “I married a gal from the Mainland and I have been away so long, but I make the best of the situation,” Chow says, “Hawai‘i is my home and you can’t beat that.”

Surprisingly, his wife Diane is not a football fan, and Chow notes that it’s been hard on her all these years. “When she goes to the games, she doesn’t watch the game. She just screams to cut out all the noise,” he says. “She raised our children, is a terrific gal and she deals with our crazy schedule and life.”

When it comes to retirement, Chow says he doesn’t give it much thought. “I am sure that day will come … my concern is that my wife and I don’t have any hobbies so that will be difficult and we need to figure that out. But, I tell my wife that our next job will be counting sand pebbles.”

The University of Hawai‘i Alumni Association (UHAA) connects alumni and friends with the university and with each other. Alumni can become an UHAA member and support the alma mater in many essential ways, including supporting UH athletics. For more information, visit uhalumni.org or the official site for UH Athletic Fundraising at www.koaanuenue.org. †Player quotes courtesy of www.hawaiiathletics.com.

There are so many ways that you can support UH students and programs. 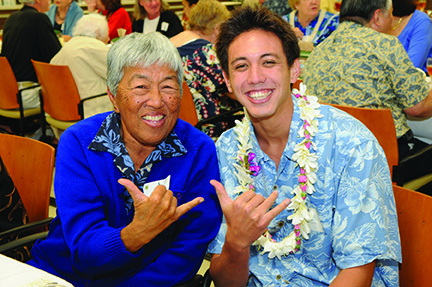