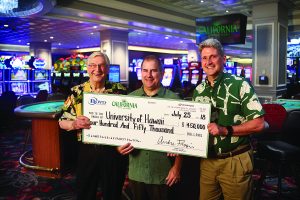 If you attend any sports events involving the University of Hawai‘i’s Rainbow Warriors or Wahine, it soon becomes obvious that local kūpuna are among their most avid supporters. From attending home games, to donating to booster clubs, to picking thousands of flowers to make lei for the Women’s Volleyball Team (as seen in S1 Ep5 of GTV), Hawai‘i’s seniors are with the athletes every step of the way.

Another long-time supporter of UH-Mānoa’s athletes is a name many of our readers are very familiar with — the California Hotel in Las Vegas. On July 25, the Cal announced a $450,000 pledge to the Athletics Department for the volleyball court naming rights of the Stan Sheriff Center. A subsequent ceremony was planned for the hometown crowd at a match at the Center itself.

The pledge will be phased over several years, supporting university student athlete success initiatives by providing assistance to student-athletes in the areas of nutrition, cost of tuition, summer school and other preparatory athletic efforts.

That’s definitely something to cheer about!