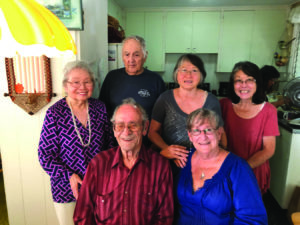 Turns out, you just might find more than two all-beef patties, special sauce, lettuce, cheese, pickles, onions on a sesame seed bun at your local McDonald’s.

Venetia Angel, 63, routinely visited her local McDonald’s in Pukalani on Maui. One evening, she approached a group of senior ladies who were playing cards. She noticed them there often. That evening, she asked what they were playing. Although she did not know the game called “books and straights,” they insisted she join them the next night. Before she knew it, she was meeting the group, aged from 60-something to 93, at McDonald’s for cards, camaraderie and coffee six nights a week, from 7 to 11 pm, when the fast food venue closed.

And as it happens, a group of senior men (70 to to 90-plus) who regularly met at an adjacent convenience store migrated to McDonald’s around that same time, when the store downsized the number of booths it offered customers who liked to people-watch. Some went elsewhere, but several found a new roosting place under the Golden Arches. They just happened to seat themselves right next to the ladies’ table to drink their coffee and talk story. The ladies soon found themselves reserving that adjacent table for the gentlemen.

Eventually, Venetia found herself calling to check on them if they didn’t show up or if their card game was cancelled. “I was just checking to see if they were ok,” says Venetia, named the “mother hen” of the group.

“This is how it started,” says Venetia. “A gentlemen who always seemed to position himself close to me heard I was going to go to Costco to have my tires changed. ‘What are you going to do while you’re waiting?’ Charley asked. ‘How about I pick you up and take you to lunch? I’m buying,’ he said.” Because her late husband, the love of her life, could never be replaced, she never even considered spending time with another man. “That last comment convinced me to take a chance,” Venetia says.

When Charley, in his mid-70s, picked her up, he opened her door and even reaching across her to fasten her seatbelt. She was impressed with his old-school etiquette. But that ended when he reached across the lunch table and tried to hold her hand. “We’re not dating!” she said.

Later, her asked her to spend his birthday with him. “Why don’t you go with your daughter instead?” said Venetia. “No, I want to go with you,” said the smitten senior. He let her pick the restaurant. Before they dined, they stopped at the hospital to visit one of the men’s group members. His daughters said, “Oh, you look so nice together! You look like you are ready for a fun date.” “We are not on a date!” Venetia again insisted. But to Charley, it was a date. He continued to hover over Venetia every chance he got.

So when the McDonald’s ladies asked him to join in the card game, he sat right next to the target of his new-found affection, swinging his arm over the top of the bench behind Venetia. “So now you are a couple?” the ladies asked. “No, no, no,” Venetia responded reflexively. After noting some flirtatious behavior by two of the other senior ladies, Venetia said, “You know, Charley, I think you should ask one of the other ladies to go out with you.” 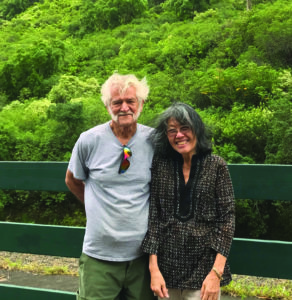 He soon started dating Annette, who was in her late 60s. They found new love, comfort and companionship in each other in their golden years, spending every day together at her home, and sharing meals at McDonald’s or Sheik’s. They held hands as Charley pecked tender kisses on her cheek.

But Annette’s Alzheimer’s was getting worse. The ladies’ group suggested that she move in with him or he move in with her “so he could watch out for her and so could we.”

But eventually, she was moved into a care facility on O‘ahu.

“Charley got real sad when his girlfriend moved away,” says Venetia.

About a half-dozen members of the group who had met at McDonald’s for over a year before the pandemic, started cautiously and carefully meeting at George’s home in 2020. George was one of the men’s group members. “His son thought is would be perfect, so we could keep him company as we played cards, even though he doesn’t usually play.” Most of the time, five of them met at the 90-year-old’s home, masked and vaccinated, only one day a week, bringing food to share with the entire group, chipping in money for toilet paper and utility costs, and sharing information about current boosters.

Heartbroken Charley stopped by, searching in vain for Annette. Although she may have forgotten him due to her dementia, Charley would never forget his Annette.

“I ended up spending a lot of time with George,” says Venetia. “I have my own room in his home. I’m there almost all the time cooking, sweeping, sanitizing, and taking him to his appointments and surgery. I’m not his caregiver. We’re friends. We have each other.”

If Venetia was asked, she would say they, too, are not dating. “We just all got to know each other just sitting at McDonald’s and talking. Now we are family.”