A Perfect Match Forged in Honesty

As it turns out, their bonds run very deep. Their commonalities are not merely superficial junctures because their initial interactions superseded the usual Dating 101 themes and banter.

Rose Singarella and Mladen Karcic, both 53 when they met through an online dating site, did not wade in the shallows during their initial conversations, but plunged right into the deep end. Mladen’s mother was seriously ill; Rose was still recovering from the loss of her fiance. She had promised him that she would look for love again. So with pain still fresh from her own loss, Rose sought to help Mladen grapple with his mother’s illness and eventual death. It just doesn’t get any deeper than that. 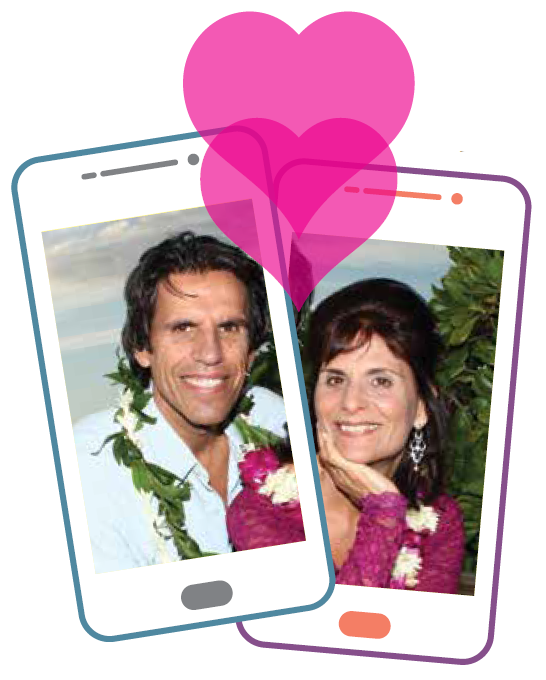 “There wasn’t anything in particular that Mladen said in his profile,” Rose said. “It was simple, straightforward and just so real. More than anything he said, I just intuitively knew he was honest, genuine and had integrity. So I wrote to him, even though I was in Santa Fe and he lived in Virginia.”

Rose had expanded her search from the Santa Fe area where she was housesitting to the entire US after several fruitless matches. “I was determined to meet my soulmate,” says Rose. “I just knew he was out there.”

Mladen had confined his search to the Virginia-DC area, so when he got Rose’s inquiry from almost 2,000 miles away, he responded by saying he didn’t think a long-distance relationship was going to work. But he changed his mind the next day. He emailed her with an apology for being so curt, and said he was willing to explore.

“I left the door open,” Mladen said. They emailed each other regularly for a few weeks. Shortly thereafter, he took his profile off the internet due to emerging priorities. “My mother is dying of cancer,” he told Rose, “and I need to drive up to New York every weekend to be with her.” Rose wrote him a long letter about grief, loss and dying, which struck a chord with Mladen.

During the weekly five-hour drive each way, they talked via cell phone. “We were not talking about romance,” says Rose. Other than discussing that they both were seeking a long-term relationship, they did not talk about marriage or even dating. “We were talking about grief, loss, spirituality and the aging process,” says Rose. “I had a lot of compassion for what he was going through.” Their conversations formed a deep bond between the two.

“I always say it was his dying mother who brought us together,” says Rose.

They continued their remote conversations for the next three months, not yet meeting each other face to face. Shortly after his mother passed, Mladen emailed Rose: “I’ve got to get to Santa Fe as quick as I can to meet the angel who got me through one of the worst times of my life.” A few weeks later, they finally met.

They both decided to move forward with the relationship. Rose thought it was important to cultivate their relationship by seeing each other as often as possible, so they promised each other they would meet frequently, at least every two weeks, taking advantage of Mladen’s cross-country business trips for IBM.

During their fourth or fifth date, Rose told Mladen, “‘I can’t imagine living without you.’ It was very clear to me that he was my life-mate. You know when you know. But Mladen thought I was a little bit nuts.” Although he was flattered, he was also shocked. It took him about a year to catch up to Rose’s level of commitment.

They continued meeting at various locations across the country for about six months, when, during one of Mladen’s visits to Santa Fe, he said, “I’m not leaving without you.” So she packed her sparse worldly possessions in her car and they drove to Virginia together. They were married in 2012, eventually transitioning to Maui in July 2020. The fact that they were able to share such pain on that level so quickly is a testament to their willingness to honestly and courageously wade into tender and perilous territory — cutting to the core — cutting to the quick. The pressure did not crush, but rendered a diamond, resilient and beautiful, crystalizing into a deep relationship.

At age 66, it is clear today that the Kīhei couple are not opposites, but complementary companions — pieces of a puzzle that fit together perfectly in love and life — an impeccable matchup of talents and temperaments.

“I feel so close to her, like she really understands me,” says Mladen. “We are really compatible. We both enjoy travel, culture and music. But more than that, she has taught me a lot and has brought a lot to the relationship. She is very nurturing. I feel very well taken care of.”

Rose still feels the same way that she did the day of her blurted-out announcement so many years before. The secret to their success, she says, is honesty, truth and lack of pretense. Add to that, the bravery it takes to expose vulnerabilities.

Be True to Yourself & Others

Rose recommends that prospective dating site users be honest in their portrayal of themselves through both words and images in their profile — as much as individuals are able to have the personal insight to relay the truth about themselves. “Sometimes it is difficult to talk about yourself. But the worst thing you could do to yourself and a prospective match is lie. Don’t be tempted to include white lies in your profile about your age or even a few pounds. Do not be deceitful about past wives and existing children. Don’t take glamour photos. Be natural; be yourself. It becomes obvious when you meet the person if they lied on their profile.”

She recommends having a trusted friend review your profile and photos before posting them. “Make sure the type of message you are sending is in line with what you are seeking, whether it is a long-term relationship or a fling.”

Rose recommends that app users expand their search area as much as possible. “Chances are your soulmate may not live on the same island or even continent as you do. We would never have met if it wasn’t for Match.com, and we wouldn’t have ignited this relationship if I hadn’t expanded my search area and he hadn’t  reconsidered an initial long-distance relationship. And you must consider traveling and even moving. I don’t believe you can cultivate a relationship if you spend a lot of time apart.”

Rose and Mladen met Susan Schwartzkopf (see “Spreading Happiness One Chocolate at a Time,” pg. 14) when she responded to an ad they placed to sell their  furniture. Susan had just arrived on Maui that morning and moved into an unfurnished condo. Upon their meeting, Rose thought, “This girl is going to be my friend.” Rose is now in the process of helping Susan with her online dating profile. She also offered to review Susan’s preliminary picks for red flags.

The internet is infested with scammers and posers ready to pounce on unsuspecting prey. This may be exponentially true for online dating sites. It even has its own name: Cat-phishing is an online romance scam and a form of fraud.

“I learned a lot about online dating,” says Rose. “I want to protect her.”