It’s Never Too Late to Take the High Road

Four mature Native Hawaiians, including two retirees, recently were ordained as deacons of the Episcopal Diocese of Hawai‘i. In the spring, “God willing and the people consenting,” they will become Episcopal priests. 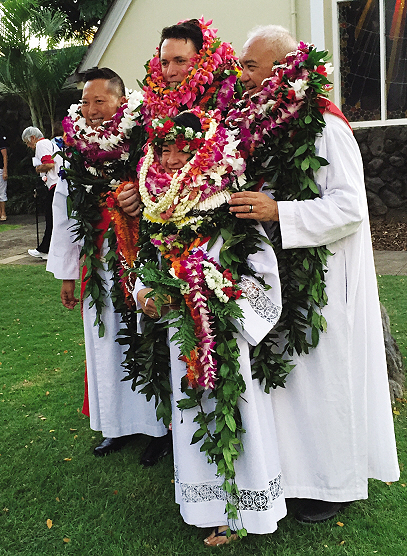 Phyllis Mahilani “Mahi” Beimes is the first Native Hawaiian woman to be ordained in the worldwide Anglican communion. After she retired as a Pearl Harbor submarine electrician, her congregation called her to enter the priesthood. She and her husband live in Kane‘ohe; their children live nearby. She is a member of St. Johns-by-the-Sea in Kane‘ohe, as is Paul Nahoa Lucas, who answers his call for the priesthood from his position as a compliance lawyer for Kamehameha Schools. He and his family live in Ka’a’awa, and his youngest son is a college freshman on the mainland.

Malcolm Keleawe Hee comes from a Buddhist upbringing. He excels as a special education teacher, and instructs teaching majors at Chaminade University. Malcolm, his wife and their two daughters’ faminies reside in Palolo. He is a member of Good Samaritan Church.

John Hau‘oli Tomoso is executive director of Tri-Isles Conservation and Development Council Inc. His life has been deeply connected to social work in the Hawaiian community and he serves as kahuna pule for the Royal Order of Kamehameha. A member of Good Shepherd Church, he lives in Wailuku with his wife and mother; grandchildren are nearby.

In Hawai’i, seniors who are called to serve the church as clergy undertake rigorous study and spiritual formation without either moving to a mainland seminary or disrupting familes and careers.

When ordained as priests, they will join a regional clerical team or a congregation; later, they may be called to serve any Episcopal church in Hawai‘i; some may even get a salary. Nine more students are preparing for ordination in 2018.

Mature deacons and priests bring to their ministries valuable lifelong experience with Hawai‘i’s varied cultures and their deep roots in the community. Native Hawaiian priests honor the tradition of Queen Emma and Kamehameha IV, who in 1862 invited the Church of England to be established in Hawai‘i.

For further information, call Reverend Linda Decker on Maui at 808-244-4656 or email her at office@goodshepherdmaui.org.