For Our Love of the Game

In the months of September and October, thousands of local people go to the 9th island, Las Vegas, to try their luck in the casinos. But each year more and more baby boomer men go there to test their skills in winning the softball title and a championship ring. 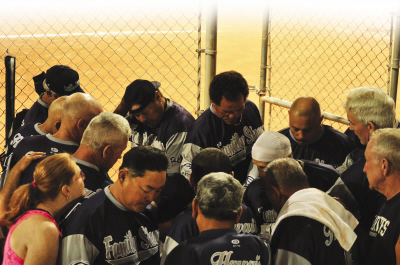 This year’s Family Stones’ 50-year-old team entered the largest division in the tournament of 49 teams from 17 states. In the previous week, the 55 and 60 age groups played for the world championship and there were 4 teams from Hawai‘i that entered. However, they didn’t fare too well, winning only two games and losing 20.

When our 50’s team heard this news, we knew we were in for a battle of our softball careers, since we had four players over the age of 55 and three players in their 60’s. Over a three-day period to win the title in this double elimination tournament, we would have to win eight games in a row; and if we lost a game, we may have to play up to 14 games.

On the first two days of the tournament, our Stones’ team played well, winning six games and were only one of two teams undefeated while going into the final day of the tournament. In each game we were going up against bigger players, and definitely experienced and better too. Being the smaller team, it was a battle and a fight to win each game. Team captains Rudy Cagulada and Johnny Arroyo, Jr. reminded us to play as a team and keep our heads up if we make mistakes or don’t get a hit. They also reminded us that we were playing for two men who founded Family Stones some 40 years ago, Ben Naki and Bully Mactagone. 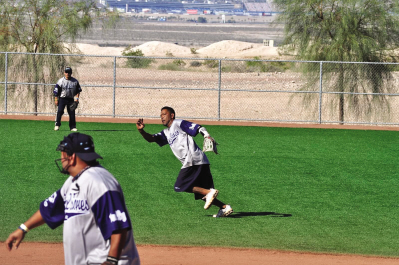 Entering the final day as one of only two undefeated teams, we faced a tough New Mexico team. We knew if we lost, we would have to play this same team again since this was a double elimination tournament.

From the first inning, our team fell behind as New Mexico went out to a huge lead, 8-1. Whether it was physical fatigue from playing seven games in three days or just nervousness, our team did not play well; and it looked like we were going to lose. By the final inning, things didn’t start out so good with the first two Stones’ batters getting out on two hard hits by Felix Mediola and Isaac Hatori. At this point, if you are a baseball fan or a Vegas gambler, you wouldn’t be betting on the losing team. Being down by four runs, two outs and no one on base, it seemed like it would take a miracle, at best, along with the baseball-God blessing the Stones’ team. “Fat chance,” said the New Mexico team, already planning to play us again for their world championship title.

Then, the Family Stones’ men suddenly woke up and hit two back-to-back singles and big Tom McCarthy hit a towering home run to centerfield to bring us within a run to tie and two runs to win the championship and title. The next two hitters and I came up with hits to set the stage with the bases loaded. Up next to bat, Joey Rodrigues comes up and singles to left field to bring in the tying and winning run with a furious slide at home plate by Fabian Loo. The whole field of Stones’ men and fans erupted as they finally won the title and World Championship! Players jumped up and down like we won the Little League World Series, hugging each other, and yes, some crying, including myself, saying, “We finally did it for Ben!” 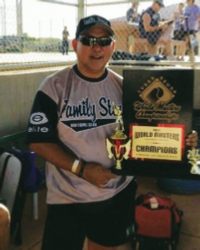 Congratulations to our entire Family Stones’ team and fans for working and playing towards our goal for the championship and the ring. Kudos also go out to MVP Craig Ayala and all tournament players, Tom McCarthy, Johnny Arroy, Jr, Joey Rodrigues and Cris Ray. Yours truly won honorable mention from the Family Stones’ team.

On a final note at this year’s tournament, Hawai‘i should be proud as one of our own, Danny Ayala of Hilo was inducted into the Senior Softball Hall of Fame. As well as, a winner of several championship rings himself, is the father of Family Stones’ MVP shortstop, Craig Ayala. Danny was at each of his son’s games and I can still hear him yelling to me as I was ready to bat, “Take the first pitch!” I thank you Danny for all your inspirational and positive messages to all of us on the team. We finally did it for Ben…and for our love of the game.