Although it seems like a believable romance story, it is a work of fiction. However, Me Before You raises awareness about some very real life-and-death issues.

The premise (no spoiler alert): A young woman is hired as a caregiver for a young man who has been quadriplegic since a motorcycle accident. The man had made a previous suicide attempt after his request to to end his life through Dignitas, a Swiss-based assisted suicide organization, was rejected. When the caregiver learns of his plans to pursue his plan to edit it all, she sets out to show him that life is still worth living. A love story ensues. 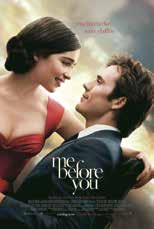 Although the plot of book and film have been criticized for even suggesting that life may not be worth living for some with severe disabilities, it has opened the door to discussion and has raised questions regarding end-of-life issues such as aid-in-dying medication, euthanasia, suicide and America’s public policy.

In the face of unbearable suffering, profound pain, terminal illness or devastating disability, can life become not worth living? If so, who should make that decision? Should public policy strive to improve care and expand choices for the end of life?

This film may help you decide for yourself.

Me Before You, the book and movie, are available online and in local bookstores.