When Douglas D.L. Chong thinks about celebrating Ching Ming as a child, he remembers waking up before dawn to the smells of home cooking. Sitting in traffic en route to the Mānoa Chinese Cemetery, a line of cars backs up all the way to University Avenue. Finally, around 7am, his family would reach their oldest ancestors’ grave sites, arriving there at the same time as about 40 other relatives.

“There were literally thousands of thousands of Chinese; hundreds of families,” he recalls. Chong is the president of the Hawaii Chinese History Center. “You’d bring all the kids; all the grandchildren. Everybody had to go to these rituals. It was a big thing — the only time the whole clan would get together.”

“This is where family history, family lore and connections are made,” he says, “but always invoking the spirits of those ancestors, asking them to bless the offspring.” 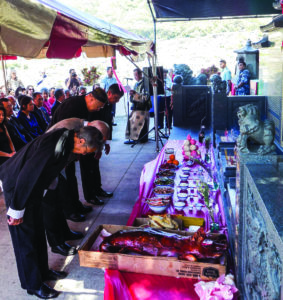 A springtime ritual paying homage to family ancestors, the Ching Ming Festival is still celebrated in Hawai‘i each April. A month-long period during which families clean grave markers and pay respects to deceased parents, grandparents, great-grandparents (and so on), it begins with a community gathering. This year, due to the pandemic, the United Chinese Society hosted a private opening ceremony April 4 at the Tomb of the Grand Ancestor in Mānoa.

Started in the 1850s, the Mānoa Chinese Cemetery sits on the ‘Akāka peak on the east side of former ag lands, surrounded on three sides by the Ko‘olau Mountains. ‘Akāka offers a clear view to the water — the Pacific Ocean — thus adhering to important concepts of feng shui, the practice of aligning oneself with nature.

“You have to be facing the water in feng shui,” Chong said. “That water is the blood of the Earth dragon — the dragon of the Earth.”

Opening ceremonies of Ching Ming this year included some of the usual trappings, but gatherings were smaller. Still, Chinese families will gather at the 10 Chinese cemeteries on O‘ahu, or the dozen cemeteries on Big Island and Maui.  Graves will be tidied and cleaned. Before cemetery caretakers were employed, Ching Ming was one of the few times in the year grass and foliage would be manicured, said Michelle Choy, a past president of the Chinese Chamber of Commerce who is active in the Chinese community. She typically attends five or so Ching Ming graveside ceremonies with family and friends; this year, she’ll likely attend only two.

While each family has its own traditions, the most traditional graveside ceremony is a long one involving symbolic grave decorations and five traditional dishes presented along with drinks and incense. A whole roast pig is presented.

Sometimes, paper objects — including spirit money — are burned so as to send an ancestor into the afterlife with all the necessary resources. Douglas and Michelle mentioned offering spirit money to ancestors who liked to go to Las Vegas.

With its focus on filial piety, the ritual begins and ends with firecrackers and includes each relative bowing several times to the ancestor.

Douglas feels satisfied and pleased watching his grandchildren and children perform Ching Ming rituals, which begin for his family at the site of his grandfather’s grave on a hillside in Mānoa. One of his grandsons is a student at Maryknoll, learning one of the five dialects of the Chinese language Douglas himself speaks.

“It’s my hope once they are exposed to it, they internalize it to make it a part of themselves,” he said. “My main theme in all of this is not cultural identity. This isn’t my cultural identity; it’s not my culture. It’s my own true self-identity.”