A 91-Year-Old Advocate of Healthy Living 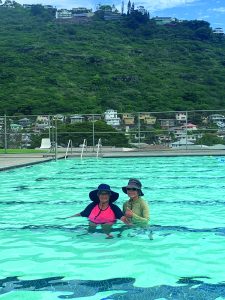 Toyoko and her daughter, Jo Ann, go swimming together nearly every day.

Hawai‘i is fortunate to have many people living well into their 90s and even 100s. Toyoko Nishiki, a 91-year-old woman, is one of the most active we have met.

Her parents were plantation workers in Lahaina. She was the sixth of 10 children — three boys and seven girls. After high school, Toyoko worked as a live-in nanny in Nu‘uanu while putting herself through the Honolulu Community College’s cafeteria management program. She secured a job at the Richards Street YWCA in Laniākea.

As a recreational break from the daily monotony of her food service employment, Toyoko would often walk from Old Waialae Road, down Kapahulu Avenue, for a brief swim at Kaimana Beach before catching the bus to work. This early affect for swimming would eventually become a lifelong practice.
When she began to suffer debilitating backaches, she borrowed a page from JFK and found that regular swimming eased and eventually completely alleviated her back pain.

Life-changing events occur in everyone’s world. For Toyoko, it was when her husband passed away suddenly from a heart attack at age 49. That was when Toyoko decided to become an advocate of healthy living. She became conscious of not only physical exercise but aware of proper nutrition. Toyoko believes in maintaining the fitness of mind (reading, word searches and puzzles), body (exercise, the physicality of gardening, proper nutrition) and spirit (gardening, the aesthetics of nature, communing with friends and relatives — since COVID-19, via phone and Zoom — and attending online church services). 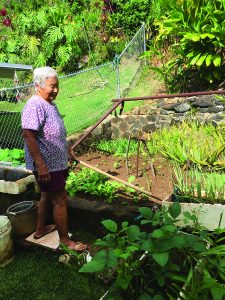 Toyoko’s garden is another favorite spot for exercise and the appreciation of nature.

Her daughter, Jo Ann Nishiki, remembers that her mother has always enjoyed working out, going back to when Toyoko went to the Punahou Fitness and Spa, where she met good friends until it closed. Before the pandemic spread to O‘ahu, she was going to 24-Hour Fitness in Pearl City. Using their machines and the jacuzzi, attending classes and swimming laps were all part of her routine.

If a friend couldn’t take her to the gym, Toyoko would catch the bus to and from Palolo/Pearl City. This is what you call “dedication.”

Daughter Jo Ann has joined her mother, driving them both to swimming. In the beginning, it took some coaxing to get Jo Ann in the water, but now they are inseparable. When COVID restrictions closed city pools, mother and daughter switched to Ala Moana Beach for their daily swim. As Hawai‘i once again began welcoming visitors, they returned to reopened city pools. The pool uses CDC protocols, so swimming is just an hour long — just enough to work up an appetite for dinner!

With a routine that would challenge much younger folks, this 91-year-old keeps on going.