Will the Election Impact Markets & Investments? 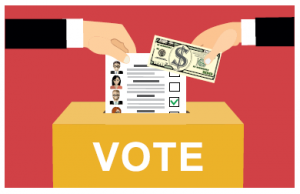 Investors are understandably wondering — and maybe even anxious — about how the US presidential election will affect the stock market. Election years often come with increased market uncertainty. And this year, COVID-19 and a fragile economy have added new dimensions to what may be a landmark US election cycle.

Regardless of who wins in November, the election will likely play a factor in the markets. Here are a few things investors should consider:

This year’s election season has been marked by unusual circumstances. Republican incumbent Donald Trump is running for a second term as president after a surprise victory in 2016. Former Vice President Joe Biden began the campaign season competing against 25 candidates for the Democratic presidential nomination before emerging as the party’s nominee after a rocky start.

There are many important issues at stake, including trade, healthcare, tax policies, social justice and our relationship with China. How well the economy is doing is also a significant influence on the election outcome, especially for an incumbent or incumbent party. But that calculus suddenly became clouded by the onset of the COVID-19 pandemic. How long the virus will persist and how significant the impact on economic growth will be remains unclear at the moment.

Even without these unusual circumstances created by the pandemic, it isn’t uncommon for the stock market to exhibit a degree of volatility in the run-up to an election. This can be particularly true in the final weeks leading up to the election and if the race is neck and neck. Investors should be prepared for circumstances where the “noise” generated by the campaign contributes to overall market fluctuations.

It’s not just about the president

It’s true that our president has tremendous influence in the direction our country takes. However, it is important to keep in mind that regardless of who is successful in winning the White House, there is a significant difference between proposals and policy. How much any administration can accomplish is influenced quite heavily by the makeup of the House of Representatives, Senate, local and state legislatures, federal regulators, as well as circumstances in the economy and the country at large.

In addition to electing a president this fall, voters will also be electing 35 senators; there are now 23 Republicans and 12 Democrats. Currently, the Republican Party has a three-seat majority in the Senate. And as happens every two years, the entire House, where the Democratic party currently controls a 35-seat majority, is up for reelection.\

Is history a guide?

While no two election years offer the same set of economic or political circumstances, it may be instructive to take a look back to see how markets have performed in the past as a means of providing some context for the present.

• Historically, market volatility begins to rise about 45 days ahead (about three weeks into September) before peaking one week before the election.¹
• When control of the White House changes parties, stock market volatility tends to increase.²
• During an election year, US stocks and bonds tend to perform better compared to the year after.³
• Interestingly, there has been very little difference in the performance of the economy under Democratic and Republican presidents since 1977. According to recent analysis by Deutsche Bank, “The average growth rate for a Democrat president is 2.9 percent compared to 2.7 percent for a Republican president.[4] However, the economic performance during a president’s term isn’t necessarily a direct result of the actions of their administration, as presidents ultimately inherit an economy shaped by their predecessor’s actions, as well as other structural factors.

What may be a more important consideration for investors than who is elected president are the longer-term drivers of economic growth and corporate profits, which are shaped by policy, but also other factors outside Washington.

The impact on specific market sectors

Although it’s speculative to try and predict the outcome of the election and all of the policy implications each party would impose, the result of the election is likely to influence key industries, such as healthcare, energy and technology.

What this means for your finances

Keep your long-term goals in mind. Review your portfolio diversification and risk tolerance with a financial advisor for an objective perspective on your financial situation.