In the last couple of months, I have had two people come to my office because they were not millionaires yet. You see, they each had won the Publishers Clearing House sweepstakes (PCH) and had not received their monies yet. 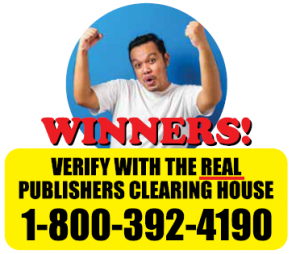 The first case was a gentleman named “Clyde” (not his real name) who was notified by telephone that he won $2.2 million. All he had to do was pay taxes on this amount and the prize money would follow. He was instructed to purchase gift cards and also send cash. Clyde maxed out all his credit cards to purchase the gift cards and cleaned out his life savings to mail the cash. In total, he was out $64,000. He came to my office when the credit card companies started harassing him and wanting payments from him.

The second case involved “Mary” (again, not her name), a retired school teacher who supposedly won $5 million (and two new cars) from PCH. Over the course of a year, with almost daily phone calls from strangers representing themselves as PCH employees, she gave them over $300,000 in cash and gift card numbers. When she was brought into my office by her son, she was still of the belief that she was a legitimate winner. Unfortunately, I had to break the news: My job was to educate her that she was not.

It should first be noted that PCH is legitimate company that was founded in 1953 to sell magazines. In 1967, the company started its sweepstakes to garner publicity and now is known worldwide for its prize giveaways. Because PCH is so recognized for giving away money, many scams have used this company’s name and reputation and fooled thousands of people into believing they won the sweepstakes.

If you have been told you have won, verify with PCH. Do not use the telephone number or email of the person who told you that you won, but speak directly to PCH at 1-800-392-4190. They will confirm if you won or if someone is lying to you.

Lastly, never send money to collect prize money if it is for fees or taxes. It is illegal for any legitimate lottery or sweepstakes company to demand payments for prizes before the money has been given personally to the winner.