Dr. Anthony (Tony) Lenzer was recently selected as the Hawai‘i recipient of the 2013 Andrus Award for Community Service—AARP’s most prestigious volunteer recognition. He accepted the award from AARP national president Rob Romasco at a volunteer recognition luncheon in November. The Andrus Award is an annual award for exemplary volunteer leadership named after AARP’s founder Ethel Percy Andrus (1884-1967) who exemplified AARP’s motto: “To serve, not to be served.”

Lenzer’s distinguished career in gerontology began in Ann Arbor, Michigan, as executive secretary of a legislative council on aging. He held that job for four years, while doing doctoral work, then taught seven years at the University of Michigan’s School of Public Health where he helped set up a Chronic Disease and Aging Program.

He came to Hawai‘i in 1969 with his wife and five children to help the University of Hawai‘i develop its gerontology program, teaching the first course on aging in 1970.

In ensuing years he helped to establish key aging-related organizations. Among them: Hospice Hawai‘i, the Hawai‘i Pacific Gerontological Socie- ty and the Hawai‘i Family Caregiver Coalition, of which he is president. He also chairs the legislative committee for the Policy Advisory Board for Elder Affairs in the Executive Office on Aging.

Lenzer has been volunteering with AARP and other organizations since retiring from the UH Center in 1994. He’s a volunteer board member for five organizations that advocate for aging, caregiving and disability policies at the Legislature. He helped create the annual “Aging and Disability Issues” report and is working with AARP now to help people understand the complex Affordable Care Act.

In the words of AARP Hawai‘i state director Barbara Kim Stanton: “No one has done more to advance our understanding of what it means to grow older in Hawai‘i and prepare a generation of state policymakers to begin addressing the challenges and opportunities of our aging population.” 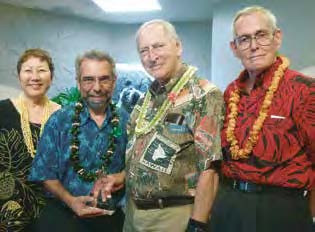