The Rarified Air of Acceptance 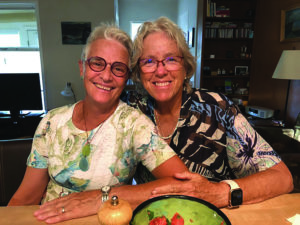 Kathleen and Susan were finally able to marry in 2019. Love won.

Our friends, old and new, are sweetly awed when we tell them our love story. We met in college in the mid-’70s. We fell in love. We knew beyond a doubt that we were meant to be together. Yet, as fate would have it, we met at the wrong place and the wrong time for our relationship to flourish. As time has told, those feelings between Kathleen and I (Susan) have now endured for decades. But it was a long road to gain respect, visibility and equality.

The Stonewall Rebellion of 1969 marked the beginning of the gay rights movement’s bloody, sacred, defiant crusade of “enough is enough.” In the summer of 1991, West Hollywood’s City Council passed a resolution in support of same-sex marriage, becoming the first city in the US to publicly affirm why marriage matters for all Americans. But many incremental steps taken by waves of activists had to happen in our country before “love won” in the 21st century. It wasn’t until 2015 that the US Supreme Court Justices affirmed a constitutional right to marriage equality for same-sex couples.

It would be an understatement to say that the passage of the landmark Marriage Equality Act was a cosmic transformation in the lives of bisexual and transgendered peoples, gay men and lesbians, including myself.

Before the MEA became law, only Jude, my best, straight high school friend, would ask me about the status of my long-term, same-sex relationship. I’d ask her about Jim; she’d ask me about my then-partner “Bette.”

Susan Miller and Kathleen O’Bryan first met in college in the mid-’70s.

Being “closeted” was filled with a constant, intense fear of “being outed”— found out. I feared the consequences, even in the diverse, ultraliberal, state of Hawai‘i. In a place that culturally revered the sacredness of mahu — those who embody both male and female spirit — gay men were routinely assaulted outside gay bars by straight men. Even here in paradise, homophobia reigned.

And even though Hawai‘i offered legal protection against employment discrimination, other equal protections under the law were limited.

In the late 1980s, “Bette” and I were raising her daughter, “Annie,” together in Honolulu. Every day was a social and emotional struggle to fit in. I had a job with a leading nonprofit committed to strengthening community by empowering young people, improving health and well-being and inspiring community. I worked fulltime in its at-risk youth drug prevention program, an innovative, cooperative partnership with middle schools, offered during school hours. Weekend group outings were also offered to kids in struggling family settings who were at risk for failure at school.

After passing the probationary period, I was offered vacation, sick leave, and healthcare and dental benefits. All my coworkers’ families also enjoyed family benefit coverage. So filling out the paperwork for my new permanent position, I claimed “Bette” and “Annie” as my dependents, neither of whom had health or dental benefits.

My supervisor, Tony, was my exact same age — born on the same day and year. We became good friends. So it was difficult for him to explain to me, sheepishly and apologetically, that the nonprofit’s administration had declined coverage for my dependents because we weren’t married.

What may have been equally hurtful, if not more so, was that while my coworkers shared openly about their kids and spouses, there was never a mention about me, my feelings and my invisible family. They all knew I was gay; a lesbian with a family. But at workplace potlucks or before office meetings, nobody asked me, “How’s da family?” The void was filled by a deafening, awkward silence. I was there — but not there.

It was back in the 1990s and domestic partnership and civil unions had yet to be recognized by the state. Eventually, benefits were extended to families of state employees, but it was still optional for private sector businesses. Even so, we persevered through decades of being a despised, oppressed minority because of who we are and who we love. Lawful marriage was beyond unthinkable.

Freedom for All Americans

When the freedom to marry became the law of our land, we were liberated. No longer immoral outcasts, we belonged, for real, in mainstream America. Before Kathleen and I got married, we were domestic partners, and because I was employed in the University of Hawai‘i system, my state employment benefits were extended to her.

But it wasn’t until the federal right to marry was recognized in 2015 that the straight world became aware of the LGBTQ persons around them who were breathing their same air — and had loved ones and families and interesting and fascinating lives! The right to be married not only liberated LGBTQ people, but straight people, too.

Kathleen now has rights to my federal employment entitlements. We don’t need wills or probate courts for either of us to keep our jointly owned belongings. Neither her family nor my family have rights to what we own together. But that wasn’t always so.

The MEA extended close to 1,000 rights and benefits to LGBQT married couples — rights we didn’t even know we were missing until 1991, when University of Hawai‘i law students began to research all the benefits and entitlements enjoyed by opposite-sex married couples. The same-sex marriage battle in Hawai‘i lasted 23 years, and in the process, helped transform LGBTQ rights in the rest of America.

I was among those in the same-sex marriage battlefield in Hawai‘i in the 1990s. We were the first state to mount a legal challenge that went to both the state and federal Supreme Courts. But it was New York that became the first state to grant same-sex couples the legal right to marry in 2015.

The first miracle for Kathleen and I was that we reunited in Hawai‘i in a future that accepted our love for each other.

The second miracle was one we never dared to believe would happen in our lifetime. Forty years after we met, we could legally marry. We waited, we pondered and we talked before joining millions of LGBTQ couples who are now legally married.

Although we had to endure 35 years of living apart before coming back to each other, we finally married and settled happily in Upcountry Maui. Now in our 70s, we live as newlyweds. We’re growing and discovering each and every day during our marriage journey.

We’ve ignited a change in society and society has changed. Winning the freedom to marry, nationwide, we all rose together.

Marriage equality gave us a new dignity. With societal shifts to more respected public identities came a plethora of socioeconomic benefits and legal protections codified in law — more social stability in our communities — a positive outcome.

And while successful marriages in the heterosexual population are in decline, the number of same-sex married couples has increased. Looking back from whence we came, we’re living an American dream. And there’s no going back to those suffocating closeted lives — we’ve done too much and come so far.

Our love moved all of us from objects of ridicule and scorn to dignity, now breathing the rarified air of acceptance — outside the closet forever, with our whole lives ahead of us.