The Need of Going the Extra Mile

It all started with a new pair of shoes.

Twenty-nine years ago, Honolulu resident Joan Davis decided to reclaim her health. “I was having some health problems,” she says. “It was time to make a change.”

So, the then-49-year-old bought a pair of athletic shoes and joined the “Saturday Amblers,” a walking group that met at Kapiolani Park every Saturday morning. A few weeks later, a member of Faerber’s Flyers, a women’s running group, nudged her into signing up for a 5K “fun run” at the park. With no running experience to speak of, Davis was initially hesitant, but decided to give it a try. To her astonishment, 3.1 miles later, she had won a medal in her age division. “My love of running blossomed from there,” she recalls.

Not long after her triumphant 5K debut, she laced up her running shoes once again and finished a 15K race at Hickam Air Force Base. “I told myself: ‘If I can do a 15K… well, I guess I could do a marathon, too,’” she laughs. She started a training regimen, and in December of 1990, ran the Honolulu Marathon at the age of 50. That’s when Davis says she realized how far she’d come — literally — in her health and fitness journey.

And looking back on it now, it was really just the beginning. 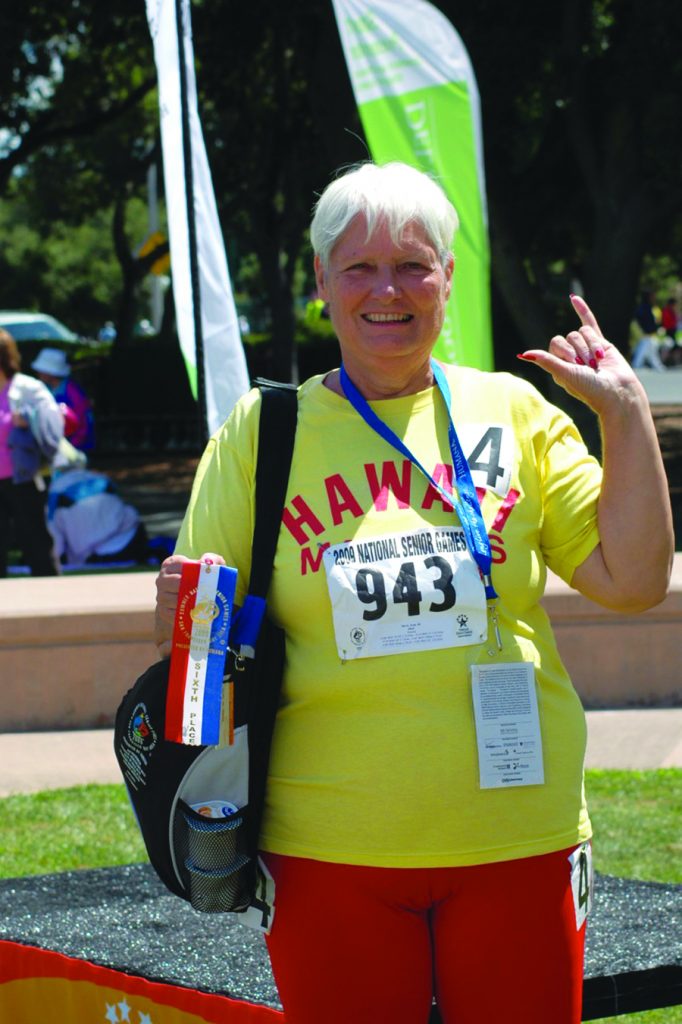 Davis went on to cross the Honolulu Marathon finish line eight more times, and if that weren’t impressive enough, she also completed dozens of 5Ks, 10Ks, and a handful of half-marathons — in Hawai‘i, on the mainland, and as far away as Australia, Indonesia, and China.

In 1995, her life took yet another unexpected turn when a friend asked her to join the Hawaii Masters Track Club. As the track and field club’s first female member, she added the javelin throw, discus, shot put, and hammer throw to her expanding athletic repertoire. “If you told me 30 years ago that I’d be a hammer thrower, I wouldn’t have believed you,” she laughs.

In 2001, Davis learned she’d qualified for the National Senior Games, a multi-sport, biennial competition for men and women ages 50 and over. Since then, she’s competed in seven National Senior Games and has racked up her fair share of medals, ribbons, and trophies; she’s also earned All-American status. In 2015, she placed 14th in the javelin throw, 16th in the discus, and 17th in the shot put in the women’s 75 – 79 age division. And Davis isn’t stopping there: She has her sights set on competing internationally, too.

For Davis, athletics is far more than a recreational pastime — it’s a passion. So much, in fact, that she readily accepted a friend’s invitation to attend a luncheon at the Honolulu Quarterback Club (HQC) 15 years ago, and five years later, joined HQC’s board of directors as its secretary. Since then, she’s added a few other titles to her expanding résumé: Hawaii Masters Track Club secretary, president of Faerber’s Flyers, state representative for the Road Runners Club of America, and first vice president in charge of race operations for the Mid-Pacific Road Runners Club.

Apart from the physiological benefits of exercising regularly, Davis, now 77, says there’s a social component that makes it twice as fulfilling.

And she will be the first to tell you that embracing an active lifestyle can be a true game-changer. “I encourage everyone to try it,” she says. “It’s never too late to start.”