The Gift Of Daniel Palmer’s Hobby 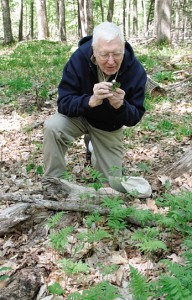 “Everyone should have a hobby when they retire” — that’s what the retired Honolulu dermatologist and part-time Michigan tree farmer Dr. Daniel Palmer says. “I didn’t know anything about ferns, but I had some friends who were preeminent fern researchers and I needed a hobby, so I just took it on and developed some skills.” And so it took root.

“Some skills” is an understatement. Over the past two to three decades, Dr. Palmer has become one the foremost experts in Hawai‘i’s ferns. His highly respected book Hawai‘i’s Ferns and Fern Allies, published by the UH Press in 2003 describes 222 species. It was the first comprehensive survey of Hawai‘i’s ferns to be published since the 1880s.

“I started collecting ferns as an amateur. I was able to go almost everywhere — all these mountain tops on O‘ahu as well as Maui, Kaua‘i and Moloka‘i — picking up fern specimens along the way that I used for illustrations in my book.”

Over the years Dr. Palmer’s specimen collection of pressed dried ferns grew, as did his extensive collection of books that includes rare, 1830 portfolios from British expeditions to the islands. Illustrations in these portfolios are accepted as type specimens for particular species. In defining new species, type specimens are the original specimens from which a formal description is made. Identifying and naming type specimens was not common practice until later in the 20th century.

In addition to collecting ferns and books to “develop some skill,” Dr. Palmer turned his vacations into sleuthing expeditions. He searched the backrooms of botanical archives and museums around the world, including then-Leningrad’s Komarov Institute, London’s Royal Botanic Garden at Kew, Tokyo University and Paris’s Jardin de Platz. Slowly, he tracked down the botanical collections from early explorers to Hawai‘i and examined the type specimens to correct or clarify the nomenclature of different Hawai‘i fern species. “I found that based on the written description, we were calling several ferns by the wrong name; but when you looked at the type specimen, you realized it was something else.” His detective work elevated the quality of his fern specimen collection and resulting book.

When asked how he benefitted from his hobby, he said, “If you don’t exercise your body, it goes to pot, and the same is true of your mind. It was fun hiking around here and worthwhile. I enjoyed it. Since nobody had ever gone back to look at the type specimens, it was fun for me to get back into the back rooms of these special places. Ordinarily, I couldn’t have done it. I didn’t have any reputation then. The herbaria staffs were just nice to let this guy in.”

In recent years, Dr. Palmer turned his attention to the ferns of Michigan, his other home. That focus has produced a book as well. University of Michigan Press will be publishing his book, “Michigan’s Ferns and Lycophytes,” hopefully this summer.

Unable to hike as he used to, Dr. Palmer said, “Now it’s time to rest.”

In the fall of 2013, he decided to donate his more than 2,700 fern specimens to the Joseph F. Rock Herbarium, the UH botanical specimen repository. Since he lives near the UH Manoa campus, he’ll still be able to visit his specimens in the laboratory to conduct additional research when he wants to. In addition, herbarium staff plan to digitally photograph the specimens and create a database that will make them available to everyone on the Internet. 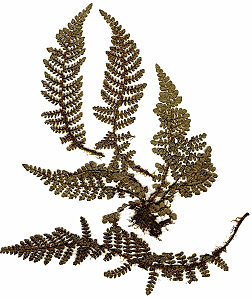 Dr. Palmer could not have done this work without his wife’s help. She tolerated his use of her stove and kitchen for drying the specimens, and helped mount them — disrupting household cleanliness and order. In addition, she had to see Paris, London, Berlin and Leningrad alone while he was doing herbarium work. But a previously unrecognized native hapu‘u tree fern carries her name–Helen’s hapu‘u (Cibotium xheleniae).

“For the next year, the botany department’s dozen herbarium staff members will be carefully counting, cataloging, curating and geo-referencing Dr. Palmer’s specimens, and their data will be incorporated into the Consortium of Pacific Herbaria project,” said Dr. Michael Thomas, manager of the university’s Joseph F. Rock Herbarium. The regional network of 22 botanical repositories is currently funded through a $1.4 million collaborative grant from the National Science Foundation.

“Dr. Palmer has also released the copyright of his out-of-print fern book to EVols online library, for noncommercial purposes. This unique, natural science collection will benefit students, researchers and the general public.

Hawai‘i residents are fortunate that Dr. Daniel Palmer began a hobby in his retirement and chose to share his research with future generations.