The Brotherhood of Senior Softball 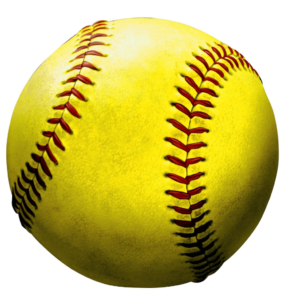 Seniors take their sports seriously, but with perspective gained over years of competition, the element of fun has become paramount for most players. Although they have a passion for playing, winning isn’t everything. Camaraderie, reunion and ‘ohana, fitness and fun are the most important elements of a senior’s game plan.

Baseball may be America’s pastime, but softball is the the No. 1 sport among seniors in Hawai‘i. There are a lot of fields and a lot of leagues. Each league has eight to 20 teams. There can be 20-plus players on a team roster. It can be played year-round, it doesn’t cost much to play and costs nothing to watch.

Kūpuna softball has been played on O‘ahu for the past 46 years. The goal is to keep kūpuna healthy and active through an activity they enjoy.

The seniors league runs year-round and is mainly played at the Patsy Mink Central O‘ahu Regional Park (CORP) in Waipahu. There is also a seniors league in Kohala, Manoa, Ala Wai and others that play on different days of the week at other fields. There is a league of some kind just about every day of the week. Over 400 seniors participate in leagues throughout the islands.

Fetuosasae “Fetu” Sua, 64, and Randy Madeiros, 69, have played together on teams and leagues in the past. Now, Fetu is the catcher and outfielder for Bad Company and Randy is the captain and pitcher for the Hawaiians.

“I play on a Friday league for 50-and-over players,” says Randy, who has been playing softball since age 20 and in the senior league for 11 years. “I also play on a Saturday league at Kapi‘olani, which is an 18-and-over league. I’m the old guy out there in that league. I also play in a co-ed league on Sunday in Kailua. I play a lot.” 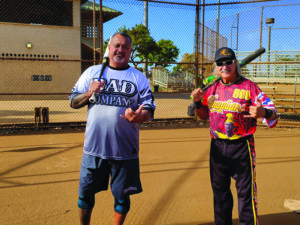 But the name of the slow-pitch softball league he enjoys on Wednesdays is the Makua Ali‘i Softball League. There are 22 teams in the league on O‘ahu that play all year long. Three other islands participate in the statewide league in addition to O‘ahu: Kaua‘i, Maui and the Big Island. Each island has its own competition. Winning teams  on each island meet up at the annual tournament.

Each team is also allowed one 55 to 59 year old on the field. “The young whippersnappers want to hit it out of the ballpark — but consistency is the key,” says Randy, who was 58 when he joined the league as the “young guy.”

“A player 55 to 59 years old is considered to be a young puppy,” says Randy. “There are many 70 and over players. We have a few players in their 80s. A retired fireman on the Firehouse team is still in the league at 87. Valued senior players are consistent and maybe place the ball over the second or third baseman’s head instead of trying to hit out of the park… just out of his reach.”

“There are guys over 70 who will play on the 60 to 65 team because they are competitive,” says Fetu. “They may be 72 but they hit like they are 67,” Fetu laughs. “But age takes its toll after a while.” Fetu is in his third year in the Makua Ali‘i Senior Softball League.

“The Makua Ali‘i Softball League can be a real competitive league,” says Fetu. “Although I want to compete at the highest level, I also want to have fun. And anyway, any team on any given day can be the worst or can be the best. It depends on who shows up to play. As for me, I get good respect when I step into the batter’s box. I am a pretty big individual.”

“We’re not getting paid for this… it’s about bragging rights,” Fetu adds. “You are really lucky if you get a trophy, too.” 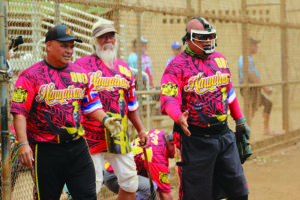 “After a game, we talk about the game… the best hit you had, how fast you ran, great catches,” says Fetu. “The next thing you know, we are having a barbecue and a few beers and talking story until midnight.”

“At this age, instead of sitting around in a rocking chair, it is really good exercise,” says Fetu. “We may not run as fast but we do try to run.”

“The brotherhood of softball definitely requires some physical activity!” adds Randy. “At our ages, that’s a good thing.”

For Love of the Game

The competition level within each team depends on the team’s philosophy.

“But the bottom line is, it’s all for fun,” says Randy. “When we unite together and play the game we love, it’s awesome! I look forward to Wednesdays. Yes, it’s mainly a fun thing, but then again, we don’t show up on Wednesdays to lose! We have fun and we try to win. I look forward to participating every week and being part of the brotherhood of softball — players my age — and having a fun time.”

“Competing is important, but so is just having  fun,” says Fetu. “We just want to go out there and have a good game. We may win or lose, but we wish everybody the best — for nobody to get hurt and go home safely to their families.”

The statewide tournament will be held Tuesday through Friday, Aug. 2 to 5, at CORP on O‘ahu. More than 60 teams may be participating.

How to Get On a Team

There are no tryouts for the Makua Ali‘i Softball League. If you fit the age requirement, let the individual team know you have been watching and let them know you want to play ball.