One of the best parts of being on the staff of Generations Magazine is that I have the opportunity to meet so many wonderful families. Quite often, I receive calls and emails from people who have a “story” to tell me, and it is very hard to write about everyone I meet or every event I attend. 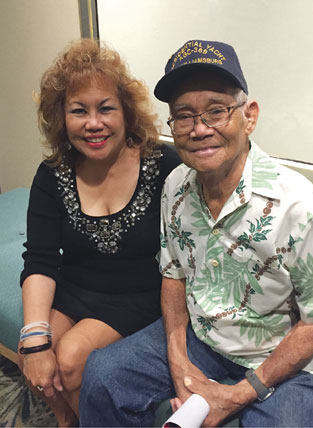 Back in June of this year, I received an email from Donna Cadiente, who said that her father was a presidential chef for Presidents Truman and Eisenhower as part of his tour of duty in the Navy. He was aboard the presidential yacht, in the White House and at the presidential retreat camp, now called “Camp David,” after President Eisenhower’s son — that’s what Armand told me. His memories of living in the Philippines, being drafted in the United States Navy, and working in Washington, D.C., back in 1946 are still strong. His tour of duty also sent him to Seattle, Taiwan, California and Hawai‘i.

I enjoyed talking with Armand, and saw his eyes twinkle when he smiled and laughed at me — hey, he’s the one with the funny disposition.

Armand retired from the Navy, apprenticed at Pearl Harbor to become a marine machinist and retired at age 60 to babysit his grandchildren. His daughters say that at almost 88 years old, he now spends his days at St. Francis Adult Day Care, where he enjoys playing solitaire while the ladies enjoy his company. Armand served our country in more ways than one!

Stories for and about seniors and their caregivers are always worth sharing, such as 100th birthday announcements.
Send your stories and photos to Sherry Goya.
808-722-8487  |  SGoyaLLC@aol.com