Please, Make the Time to Visit

When my father-in-law “Gramps” had a stroke, he spent time at the hospital, rehab, and then a nursing home, before finally being able to return to his house. During those months of recovery away from home, my family made every effort to visit him daily. Between my wife, brother-in-law, mother-in-law and myself, we were pretty successful in making sure he would have the company of a loved one every day.

We did this initially because we didn’t want Gramps to feel alone. Eventually, however, we discovered that he was getting better care and more attention from the staff because of our visits. When we walked into the facility, it would coincidentally seem to be at the exact time for the staff to check on Gramps. Once they saw one of us walking down the hall towards his room, they would leave their duty station and follow us inside, telling us all the details of his care as they fluffed his pillows and made sure he was comfortable. 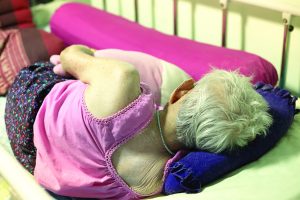 We could not help but notice, however, that his roommate and other patients did not get the same treatment. They were either lying in bed all day in
silence or sitting in a wheelchair parked outside in the hall watching us come and go with lonely stares.

Over the years, I have gotten many calls from people suspecting abuse or neglect of loved ones at care facilities. During these conversations, I would always ask them when was the last time they saw their loved one before the alleged abuse. I did this to get an idea how quickly the neglect occurred or see if there were signs of abuse witnessed.

Despite my intentions, however, the callers would get defensive, relating various reasons why they were not more attentive nor visiting that often. Their reasoning was that if the place did their job correctly, they wouldn’t have to check on things themselves and visit that often. And while this is true in theory, the reality is that there are some care facilities that are understaffed or have employees under trained and a regular visit could detect such problems if they exist.

While I am sure that the majority of residential facilities provide quality, attentive care, more and more instances of the opposite happening are coming to my attention. Recently, the Honolulu Medical Examiner’s Office called me, concerned with the number of bodies they were receiving from such places whose cause of death could only be attributed to “extreme neglect”. Additionally, the Long-Term Care Ombudsman has some concerns about oversight and care of seniors in facilities and has invited our office to join them in examining the problem.

In the meantime, I urge family to always make the time to visit loved ones. No amount of money spent for care is a substitute for actually being there yourself. Your visits will not only be appreciated, but also noticed.