Playing for the Fun of It! 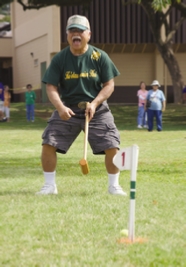 Twenty-four years ago, Herbert Yasuhara, then Halawa Park Director, wanted to find an activity that his senior club members could participate in to keep active and exercise. He said, “You see, most of the seniors back then would come to the park and sit down and play games like Mah Jong and Hanafuda.”

It’s all smiles as teams compete in “Tunnel Vision” in the gym and John Macadangdang of Ko‘olau Senior Hui plays “Peg Ball.” 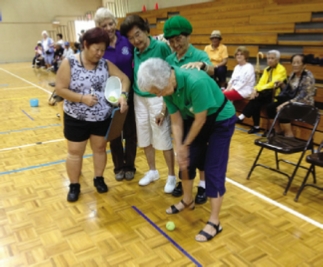 The Department of Parks and Recreation Annual Senior Classic Games (organized games created for seniors) was held on March 21, 2013 at Halawa District Park with a total of 87 teams entered in four different games. There were 261 participants, not including spectators, enjoying a beautiful spring day. Divisions for the games were: Senior Division (55-69 yrs.) and Master Division (70+ yrs.). The games consisted of Tunnel Vision, Peg Ball, Pin Ball and Nine Gates. The creator of the games, Herbert Yasuhara, retired 20 years ago from the Department of Parks and Recreation. Thanks to Yasuhara’s son, Randy, a Recreation Specialist the games continue on.

Sponsored by Generations Magazine, individual achievement certificates and medals for winners were presented to each division for outstanding performance. For more information and to join in the fun and laughter, contact Recreation Specialist, Garrett Iwai at 768-3030 or by email, giwai1@honolulu.gov.