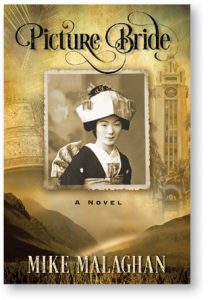 Picture Bride is a remarkably engaging read, and from a historical sense, a body of research that brings to the forefront something that has escaped attention — Japanese-American culture. Everyone in Hawai‘i should read it!

The immigration experience of Issei Japanese workers at the turn of the century has been documented, as well as the valor of their Nisei descendants, the 100th Infantry Battalion, 442nd Regimental Combat Team, 552nd Artillery Battalion and 232nd Combat Engineer Company.

Author Mike Malaghan’s wife, Tomoko, helped him interpret Japanese cultural values of the first immigrants —attributes that later made them American patriots integral to the U.S. and Allied war against the Nazi’s in Europe and the Japanese Imperial Army in Asia.

The protagonist, Haru, narrowly escapes sexual servitude in Amakusa, Japan, before becoming “picture bride” to a Buddhist priest, ministering to workers at Parker Ranch in Waimea on Hawai‘i Island. Mild and polite, but intelligent and strategic, Haru delicately navigates her community through plantation strikes and government opposition to Japanese language schools.

She supports her family with her passion for American freedom, noble aspects of Buddhism, and Japanese respect for knowledge and mastery. Her three sons honor her legacy as Nisei soldiers.