Your Mind & Body – Protect Your Athletes from Dementia 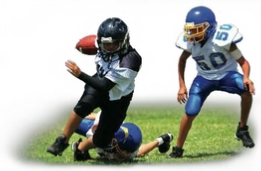 Watching your kids or grandchildren play hard in a team sport can be a lot of fun. It’s great to be involved and to be a source of encouragement. It’s equally important to keep them safe while playing high-contact sports and to know when they should take a break.

A study commissioned by the National Football League (NFL) found that former players ages 30 to 49 are diagnosed with memory-related disorders at a rate of 19 times the national average. Chronic traumatic encephalopathy is a progressive neurological disorder found in people who have suffered some kind of brain trauma. Dementia pugilistica is the progressive end-stage of the chronic traumatic encephalopathy. This is a type of dementia that may affect amateur or professional athletes who suffer concussions. In the past, it was commonly known as “punch drunk syndrome.”

Why does this occur?

The cause of the brain injury is the cumulative effect of repetitive sub-concussive blows. Although the syndrome is not well understood, it’s believed that repetitive blows to the head can cause loss of neurons or brain cells, scarring of brain tissue, protein build up in the brain, damage to the cerebellum, damage to the blood vessels in the brain, senile plaques and neurofibrillary tangles.

How is dementia pugilistica diagnosed?

Can athletes prevent this?

Parents and grandparents play an important role in encouraging children to use protective gear when playing contact sports. A Grade 1 concussion is always treated with rest and continued observation. The athlete should not return to play until he/she receives a medical clearance. And athletes should follow the coach’s advice for rest periods.

Athletes who return to play too soon after a concussion are at risk for second-impact syndrome, an often-fatal swelling of the brain caused by a second blow before the first is healed. Take collisions on the field seriously and seek medical attention.

Dr. Ritabelle Fernandes, MD, MPH, FACP is Clinical Associate Professor at the Geriatric Medicine Department of the John A. Burns School of Medicine, University of Hawai‘i. She is board certified in Geriatric medicine, Hospice and Palliative Medicine, Internal Medicine and Home Care. She is a practicing physician at the Kokua Kalihi Valley and Kalihi-Palama Health Center.