Les Murakami: The Heart of a Warrior Through & Through

“Don’t give up… I still exercise six days a week.” 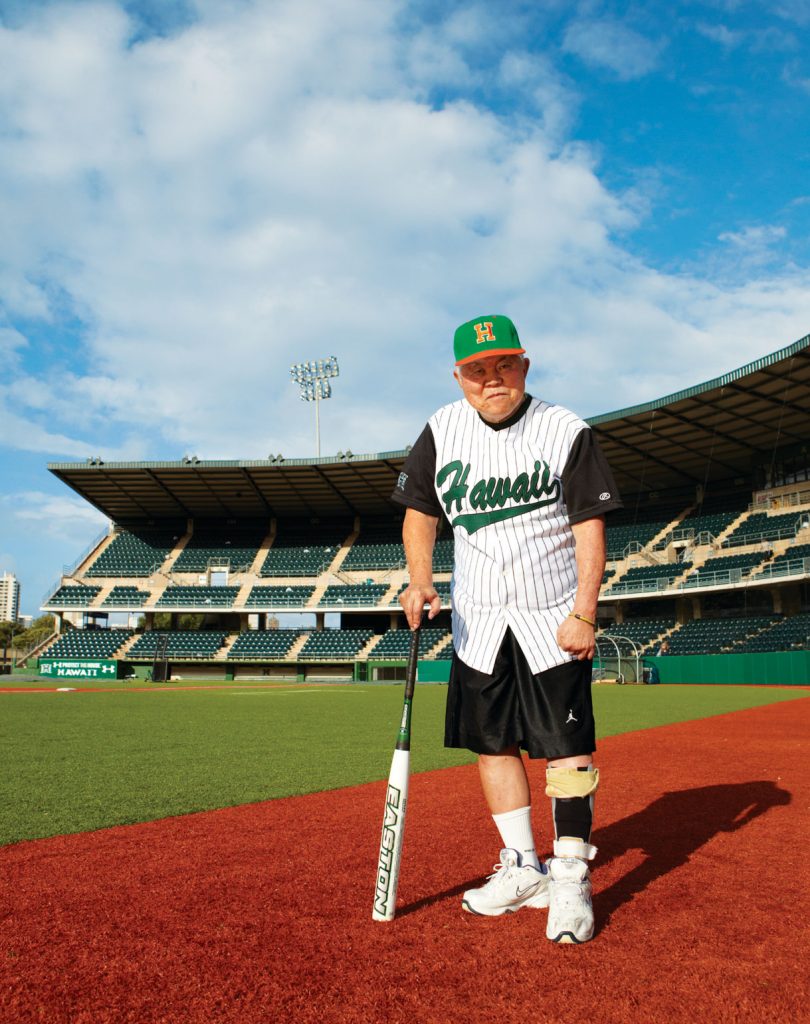 Former UH Coach Les Murakami had an award-winning baseball coaching career at the University of Hawai‘i. He coached more than 500 players in a victory-studded career that stretched from 1971 to his retirement in 2001. But his retirement didn’t come by choice. On Nov. 2, 2000, Murakami suffered a severe stroke. He underwent surgery to relieve pressure on his brain and remained in critical condition following the operation.

For the past 12 years, Coach Murakami hasn’t given up on his recovery. He attends rehabilitation sessions several times a week to regain control of the left side of his body that was weakened by the stroke. His main goal is to be as independent as possible.

Generations Magazine recently sat down with Coach to check on how he’s doing. We wanted to hear about the new stroke recovery technology he’s been using at the Rehabilitation Hospital of the Pacific … and to reminisce a little bit about playing ball.

GM: For the fans who may not know, where did you grow up and can you tell us a little bit about your small-kid days?

LM: I was born in Makaweli, Kaua‘i, and lived there until the age of I0. My family moved to O‘ahu in I947. I attended Queen Ka‘ahumanu Elementary School and then from the 7th grade I attended St. Louis, where I graduated in 1954.

GM: Can you tell us some of your most memorable stories of the good old days growing up? Did you have any mentors or athletes that you idolized?

LM: On Kaua‘i, I played war games in the forest, basketball in the gym and went fishing with friends in the Shinsato Reservoir. When my family moved to O‘ahu, I played football and baseball with friends at the Bodaiji Temple on Birch Street.

At St. Louis High School my mentor was Coach Francis Funai — even though he cut me when I turned out for baseball in my sophomore year. I did eventually make the team, and in my senior year we won the state baseball title over Mid-Pacific Institute. I learned all of the fundamentals of baseball from Coach Funai. He was a very soft spoken man. Very strict, but very fair.

I also admired Larry Yagi, a shortstop who played for Rural Redsocks of the Hawai‘i Baseball League. He made difficult plays look easy.

GM: What kind of influence were your parents on you? Were you always involved with sports?

LM: My parents, Henry and Shino Murakami, had a great influence on me, of course. I learned ‘academics before baseball’ and that honesty was the best policy. Today, my motto is still “my word is as good as gold.” My parents sacrificed a lot to send my brother and me to St. Louis High School, and later to Santa Clara University, which is a private California college. I was offered a baseball scholarship from Fresno and other schools, but my parents turned them down. They wanted me to focus on education first — not just play ball.

My parents were my greatest fans. They attended all my games and went on all the road trips. When we hosted visiting teams, my mom cooked and made sandwiches for my team.

My father owned Ace Appliance in Mo¯‘ili‘ili and he sponsored “The Cubs,” which was the first baseball team I coached in 1953 when I was I7 years old.

GM: How did you actually get involved in starting UH baseball and why?

LM: By the time I was approached by UH athletic director Paul Durham about coaching the UH baseball team, I was already winning championships as coach for two teams — the “Midas Muffler” softball team and the Japanese-American “Sheridan AC” baseball team. I turned Mr. Durham down three times, as there was no field and scholarships to give players, but he persisted. When he asked me the fourth time, I finally agreed. My family encouraged me, Take it. There’s nothing more for you to win.

Mr. Durham dreamed big and pushed tirelessly to get UH baseball off the ground. He attended the yearly collegiate baseball conventions and asked if any of the Mainland teams would come play in Hawai‘i. Legendary Coach Rod Dedeaux with the University of Southern California was one of the first to bring his team out to play the Rainbows. The teams played … and UH lost all 6 games.

GM: What were those early days like with no field and no scholarships?

LM: Terrible! Thank goodness for my family and friends who believed in me. 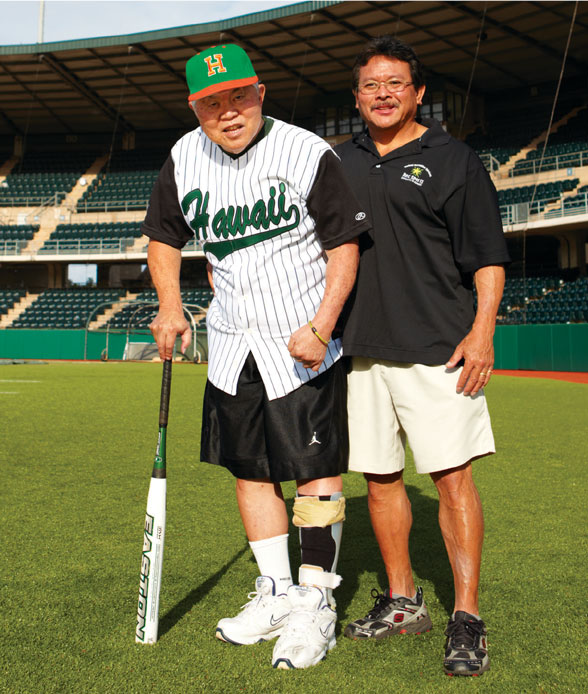 LM: In the ’70s, Mrs. Murakami (Dot) called it the “Aluminum Stadium” and when Derek Tatsuno pitched, the line to buy game tickets wrapped around the stadium. A special thanks goes to Rose Nishi who lead the volunteer crew, while Dot and other concession volunteers cooked and prepared extra food for the large crowds.

GM: You are well known for being the first full-time UH head baseball coach. How did your wife and family deal with your passion for baseball?

LM: My wife and children have been very supportive, and they all had their turn working the baseball concession in the early years. Dot and my friends fed the boys until the end. We were always a team. Dot was always there and always found ways to get the program going.

GM: Reflecting for a second, any regrets in life or in baseball? LM: Yes, my only regret is that I did not win the College World Series in 1980. I came in second against Arizona.

GM: Do you think baseball has changed?

LM: Baseball has not changed. The equipment has! Players are bigger, stronger and faster.

LM: Since the stroke, life has changed drastically for me. Unfortunately, I’m not as independent as l used to be, but I stay as active and social as possible with my family and others. I go out for a couple of hours daily.

GM: What type of therapy are you receiving for the stroke?

LM: I go to therapy at the Rehabilitation Hospital of the Pacific. They give me excellent care, and keep me focused on recovery. My walking continues to get better and my speech has improved to almost 100 percent.

And, my physical therapist Jerry Ono “busts my ass” to work hard and get better. I can not thank him enough.

GM: How has Rehab’s high-tech equipment come into play with your therapy? AlterG’ differential air pressure technology provide precise unweighting in small increments to as low as 20 percent of the patient’s body weight. This precision gives patients the ability to set the exact point where exercise becomes pain free and provides clinicians a way to accurately measure a patient’s rehabilitation progress.

LM: Luckily for me, Rehab offers a full rehabilitation program and leads the way in stroke therapy equipment. They use technology to do what’s never done before. I get to use the hospital’s AlterG’s Anti-gravity Treadmill. It’s the only one in Hawai‘i.

During therapy, the treadmill and I are in a ‘bubble’ and I’m strapped in at the waist. The ‘bubble’ fills with air, and the adjusted air pressure takes the weight of my legs. It feels like I’m walking on the moon, with little gravity. The treadmill lets me practice walking, get some exercise and keep my weight under control.

GM: You have had a caregiver five days a week for 10 years now. How are you affording this extra cost?

LM: My wife Dot made me buy long-term care insurance after our experience with my mother’s Alzheimer’s disease. I didn’t want to buy insurance at the time, but Dot convinced me.

LM: Oh, yeah. I couldn’t be where I am today without it. As Dot says, “Your life is more important then your house. She loves me, but no one can be with someone for 24 hours a day. She needs a break and time for herself, too. 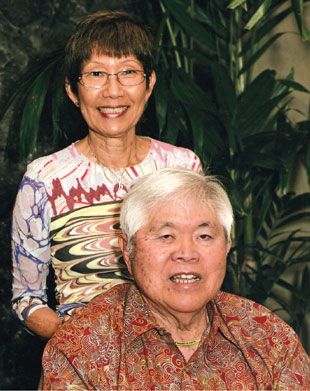 GM: What do you do to keep active in life?

LM: Monday through Friday I exercise at different facilities. I meet and talk to people all the time at the mall or wherever we go to say, “Hi.”

Sunday is family day. We go to church, and then maybe we go to the movies, watch my grandkids’ games, go to a UH football or baseball game or watch special sporting events on T.V., invite friends over to the house — stay connected. LM: At times, it’s frustrating because l cannot physically demonstrate to my 10-year-old grandson, Maxx Muramoto, the fundamentals of pitching, fielding and hitting. His 6-year-old sister Madixx is playing her first season of baseball, too. They keep me busy and active. I love them very much.

When I’m in rehab, Dot spends time with our grandchildren, especially our 7-year-old granddaughter Erin Murakami. She has spinal muscular atrophy. She uses her eyes, ears, and little movements in her hands and feet to communicate. She is smart. She is my inspiration. She’s a very strong spirit and she never gives up. The doctors gave her a few years to live. She’s going to be 8 years old in June.

GM: What would you say to other stroke victims in dealing with their rehab?

LM: Don’t give up and don’t stay home. After all this time, I still exercise six days a week. People can’t believe the good shape I’m in, especially at the age of 75 and as a stroke survivor.

Identify atrial fibrillation (Afib): Afib is an abnormal heartbeat that can increase stroke risk by 500%. Afib can cause blood to pool in the heart and may form a clot and cause a stroke. A doctor must diagnose and treat Afib.

Control alcohol use: Drink only in moderation –no more than two drinks each day.

Control diabetes: Many people with diabetes have health problems that are also stroke risk factors. A doctor and dietician can help manage diabetes.

Transient Ischemic Attack (TIA): A TIA is a temporary episode of stroke-like symptoms that can last a few minutes to 24 hours but usually causes no permanent damage or disability. TIA and stroke symptoms are the same. Recognizing and treating a TIA can reduce stroke risk. Up to 40 percent of people who experience a TIA may have a stroke. Courtesy of the National Stroke Association’s Stroke Prevention Advisory Board, www.stroke.org.