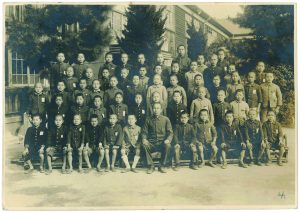 Lawrence Fumio Miwa was born in Hawai‘i in 1931 and lived in Hiroshima, Japan, from age 2 to 15. Now 89, he was 14 years old when the atomic bomb was dropped on Hiroshima, Japan, on Aug. 6, 1945. Although he was in school approximately 20 miles away from his Hiroshima home, he could see what happened. Seventy-five years later, he can still recall “that unforgettable morning,” when the bombers flew over the city. He remembers the blinding yellow flash from the atomic explosion. He thought at the time that it was the end of the world. He wondered if his family survived.

Days later, he returned to the city and witnessed overwhelming casualties and total devastation. “People were suffering severe burns and their clothes were burned and tattered.” 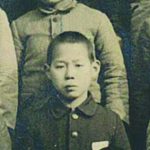 Lawrence Fumio Miwa at age 12 in 1943, when he was a sixth grader at Misasa Elementary School. Opposite, at age 88, visiting Punahou Japanese classes in 2019.

Approximately 70,000 people were killed when the US military dropped an atomic bomb over Hiroshima during World War II. Tens of thousands later died from radiation exposure and cancer. Three days later, another atomic bomb was dropped over Nagasaki, killing about 40,000 people. The exact mortality figures will never be known. The destruction and overwhelming chaos made orderly counting impossible. 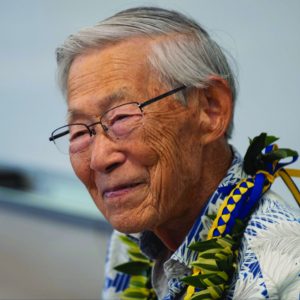 “We didn’t know that that was the first atomic bomb,” he said. “On Aug. 15, our teacher allowed us to go back to the city — and for me, to find out if my parents and sister were still alive. When I arrived at the Hiroshima train station, there were no houses or buildings. The ground was burned and blackened. In that moment of time, I was the only person standing alone in the city where some 140,000 people had lost their lives. I was sure I had experienced a big turning point in my life.” Miraculously, his family survived.

August marks the 75th anniversary of the bombings. Larry has devoted his life to sharing his story with the goal of working together to eliminate nuclear weapons.

“It should not matter what nationality we are,” says Larry. “We are all human beings living together on our precious Earth. We all have a duty and responsibility to preserve humanity for our future  generations. We should work together, setting a goal of common sense and decency to eliminate all nuclear weapons and related materials, for the sake of world peace.”

“No one, especially our children, should ever experience the horrors of nuclear weapons,” Larry said in a recent public presentation. “Please remember my story of survival. Overcoming animosity and making efforts to understand each other can lead to world peace and a better world for every one of us.”

Larry shared more thoughts at the University of Hawai‘i Matsunaga Institute for Peace via Zoom on August 5, 2020. You can see the recording here.

The five-generation history of Miwa’s family is detailed in the book Tadaima! I Am Home by Tom Coffman.