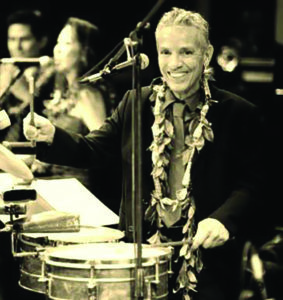 At 71, Rolando Sanchez has the energy of a man half his age. Scratch that. He has the energy of a man a quarter of his age. If you’ve been in Hawai‘i for any length of time, you’re familiar with the charismatic percussionist/singer/band leader Rolando Sanchez, known for his high-energy shows that established Latin dance music in the islands that has continued for over 40 years.

Born in Masaya, Nicaragua, on Oct. 6, 1951, Rolando spent only a few of his childhood years in Central America. The political instability of the country was at question and his parents wanted a better life for their children, so they moved to the Bay Area in 1966, where he attended school and developed his musical talents. 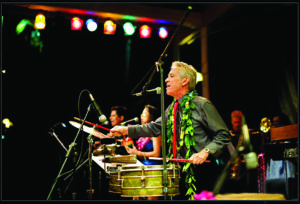 He fondly recalls gathering his mother’s pots and pans and beating them with a wooden spoon — his very first drum kit that would propel him as a percussionist.

While growing up, his talent matured and he joined a variety of local San Francisco bands, which led to a stint as opening act for B.B. King. While on tour, Sanchez found his way to Hawai‘i where he eventually settled in 1984. One of the first things he did after arriving in Honolulu was enroll in a six-week course at the University of Hawai‘i at Mānoa to learn aspects of music other than percussion, which he knew well. But unfortunately, his music career would have to wait. Bills had to be paid, so he took a job with a pedicab company  and peddled tourists around Waikīkī. It was on those pedicab rides that he was able to discover the hottest nightclubs where the tourists wanted to go. That gave him knowledge about the club scene — but he had no band to accompany him.

Coincidentally, it was also during pedicab rides that he discovered some very accomplished street performers in Waikīkī. He found two excellent musicians and his trio was born. 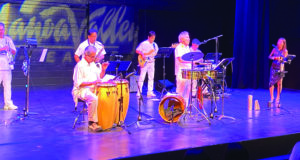 A regular gig at Anna Bananas became so popular that Rolando knew he needed to move to Waikīkī clubs in order to grow and add a little “sauce” to Hawai‘i’s music scene. He told the band they needed to “clean up,” wear matching outfits and make a good showing. It worked. The trio and subsequent band, Rolando Sanchez and Salsa Hawaii, was off to the races, with gigs at The Row Bar, Compadres, Black Orchid, Trappers, Gussie L’Amours and Nick’s Fishmarket — some venues now only long-forgotten memories.

Reviewers Wayne Harada and John Berger made the crowds even bigger in a town where lively, upbeat and danceable salsa was practically unheard of. But Rolando established himself as el rey de la musica tropical en Hawaii (the king of tropical music in Hawai‘i) when he brought contemporary Latin salsa to mainstream Honolulu nightclub audiences in the late ’80s. 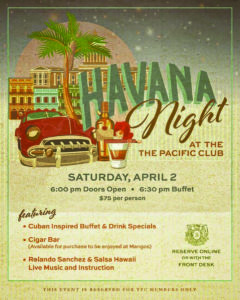 Rolando’s enthusiasm and determination to bring Hispanic music to the forefront led him in 1989 to establish an annual Latin Music Festival to celebrate Hispanic Heritage Month. What started as a modest festival at The Row Bar turned into a major event on Kalakaua Avenue.

The enthusiasm   continues to this day and he still plays at major events. A recent fundraiser at the Pacific Club sold out. More shows are in the pipeline for 2023, but his focus right now is on a new record that he plans to release in the coming months.

Up next are more concerts and special events, along with his regular Sunday afternoon radio show on KNDI Radio 1270AM. Sadly, the nightclub scene has been floundering in recent years, the pandemic notwithstanding. Rolando says there are some clubs operating, but hiring DJs is more economical than hiring bands. His main focus in 2023 will be a return to the studio to record a new single featuring three of the female vocalists who have been with the band through the years: Lin Brown, Judi Palrmeira and Jules Kam.

When asked if today’s younger generation is into salsa, Sanchez emphatically says “Yes! They are just as enthusiastic about the music as their parents and grandparents were 40 years ago.” He says he’s excited to see Latin music flourishing in Hawai‘i and proud that he’s been an integral part of it.