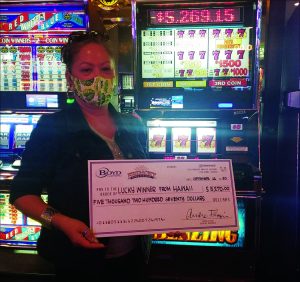 A frequent Las Vegas visitor from Hawai‘i turned her trip to the Fremont Hotel and Casino into a nearly $790,000 jackpot playing Aristocrat’s Buffalo Inferno™ slot game in September of last year.

Louise (last name not released) usually stays and plays at the California Hotel and Casino, but decided to stop by the Fremont on that lucky Wednesday morning, hitting the $789,062 progressive jackpot at 8:37am.

Louise thought she won $79,000 at first, but quickly realized she had won 10 times that amount!

But that wasn’t the end of Louise’s visit from Lady Luck. While waiting for the payoff from her huge win, Louise hit a second jackpot of more than $5,000 on a nearby machine!

The Fremont and “The Cal,” two of three favorite destinations for residents traveling to Hawai‘i’s “ninth island,” opened in June. The third fave, Main Street Station, is expected to open at a later date.

After closing for over two months, opening casinos have put measures in place to ensure the health and safety of visitors and workers alike. For example, every other gaming machine is turned off to allow for social distancing. And a limited number of players are allowed at blackjack and craps tables.

Lady Luck is alive and well in Las Vegas and welcoming folks back to have some fun again!