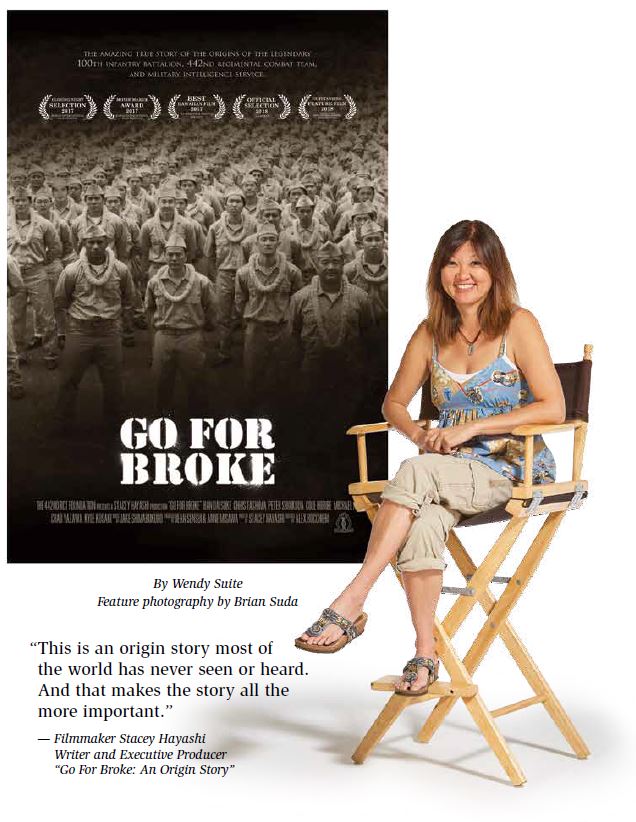 As morning dawned on December 5, 1941, a fisherman cast his net along O‘ahu’s north shore. A college student helped his father open a new business. A volunteer took kids to the beach in Waimānalo. Two University of Hawai‘i students, watching soldiers running drills nearby, talked about war preparations while they checked out the surf. It was pretty much like most other days, for most people.

But Sunday, December 7, 1941, would become known as “a date which will live in infamy” and President Franklin D. Roosevelt would announce to the nation the next day that, early on Sunday morning, “the United States of America was suddenly and deliberately attacked by naval and air forces of the Empire of Japan.”

The bombs that dropped on Pearl Harbor exposed fears, suspicions, and distrust toward Japanese immigrants (issei) and their American-born children (nisei).

The days leading up to December 7 were idyllic for many, including Japanese American youth, most of whom had never been to Japan and whose patriotism for America ran deep.

It’s against this backdrop that a new, locally produced film, “Go For Broke: An Origin Story”—written and produced by Stacey Hayashi — tells the true story of the origins of the all-Japanese American military units: the 100th Infantry
Battalion, 442nd Regimental Combat Team, and Military Intelligence Service (MIS) during World War II. 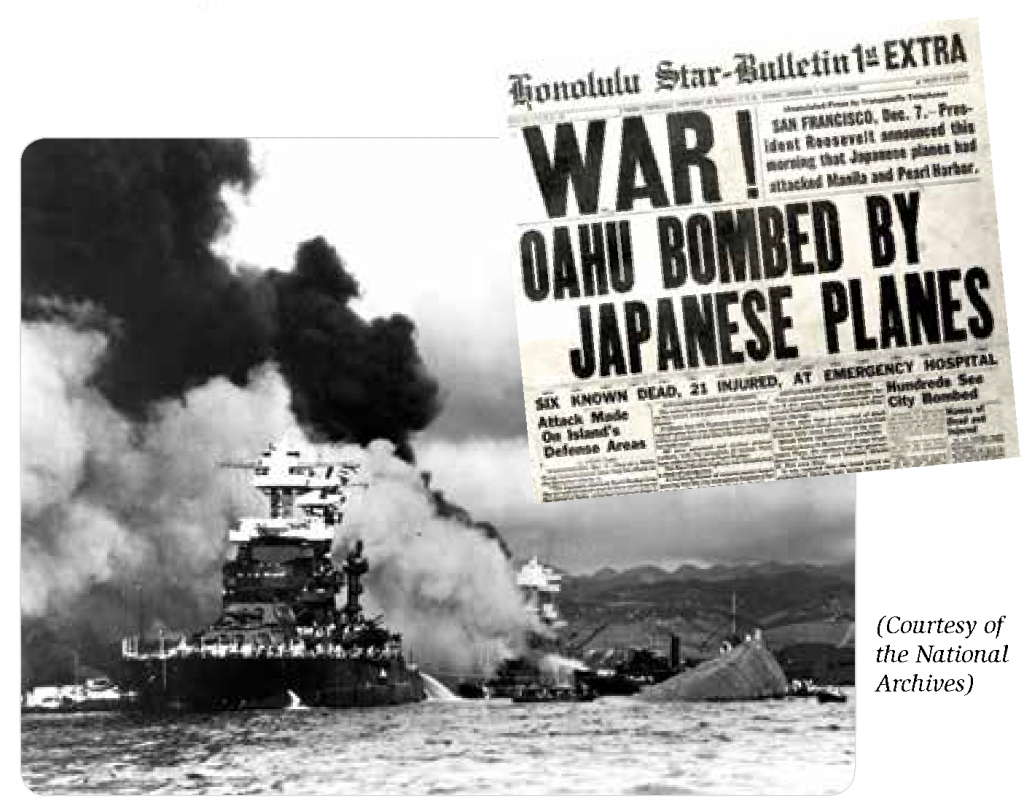 A bow-on view of the lightly damaged battleship USS Maryland with the burning USS West Virginia behind her and the capsized USS Oklahoma beside her, Pearl Harbor, US Territory of Hawaii, 7 Dec 1941.

Like today, most people of Japanese descent born in Hawai‘i in the early 1900s felt fully American. It was the only country they knew.

Why, then, did Japanese Americans feel a need to prove their loyalty to their country?

What compelled them to show such selfless courage on the battlefield that theirs would become the most decorated combat unit for its size and length of service in American history?

The answers to these questions can be found in the untold stories of these humble, loyal, and in many ways, ordinary Americans whose actions proved their loyalty to their country. 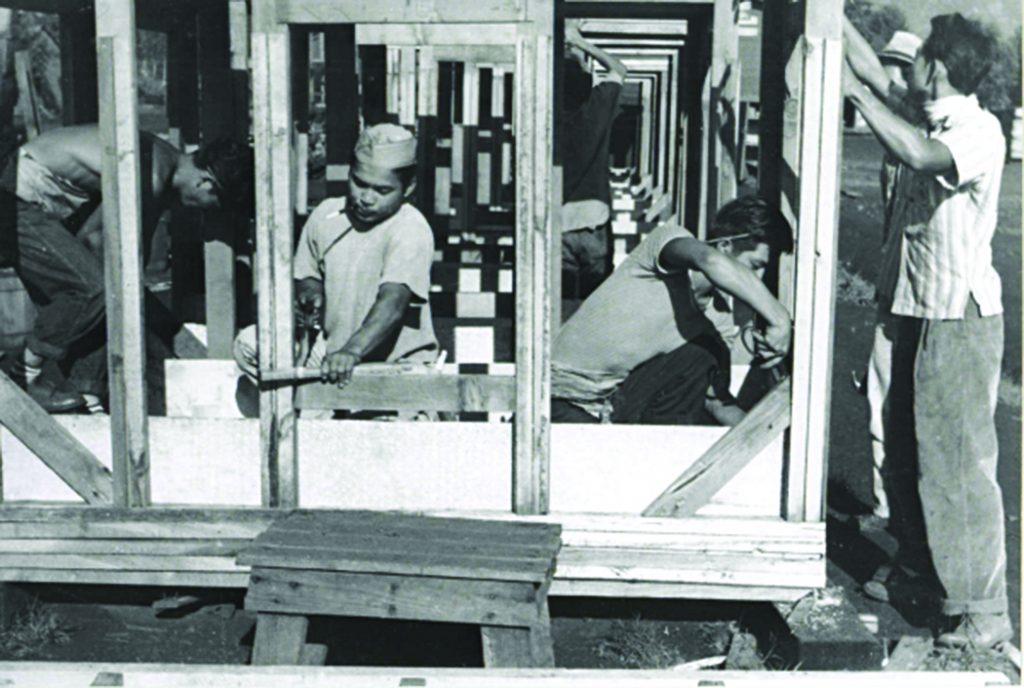 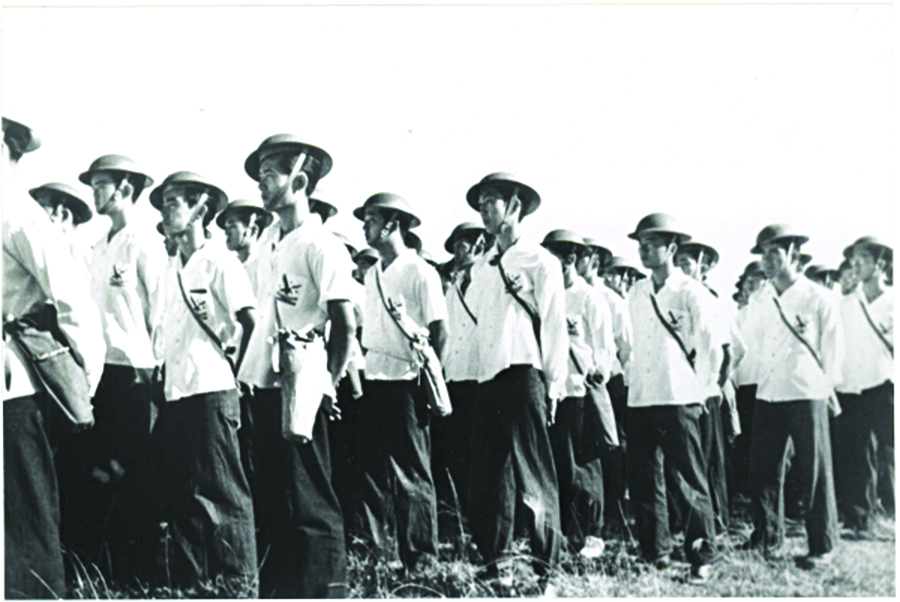 The fight to fight

The first of these untold stories was the fight for the right to fight for their country. Before the nisei soldiers could display extraordinary valor against the Nazis in Europe, they faced tremendous adversity on the home front.

Few people were aware then, or even now, that 4,000 Japanese Americans were already serving in the U.S. armed forces at the time of the attack on Pearl Harbor, most of whom were in Hawai‘i, serving draft time.

Soon after the Japanese attack, Americans of Japanese Ancestry (AJAs) were reclassified 4-C: “enemy aliens,” ineligible to serve in the U.S. military — despite being U.S. citizens. AJAs already in the military were discharged and stripped of their weapons, simply because of their race.

Other AJAs, who wanted nothing more than to fight for the country of their birth, were denied that opportunity, simply because of their race.

Few people are aware that the 442nd Regimental Combat Team wasn’t organized until more than a year after the start of the war—a critical period of time when Japanese in America faced racism, discrimination, arrests by the FBI, and mass incarceration on the U.S. West Coast. Even fewer people are aware of the circumstances and actions which led to its formation—stories which form the heart of the movie “Go For Broke: An Origin Story.”

On December 7, members of the university ROTC were activated into service as the Hawai‘i Territorial Guard (HTG). They were assigned to protect ‘Iolani Palace, other government buildings, and utility and military installations — proud to serve their country and trusted to repel the impending invasion. But then the soldiers became highly discouraged when their own government called them: enemy aliens.

That’s when a little-known hero stepped into the story. A community leader and Executive Secretary of the Atherton YMCA, Hung Wai Ching empathized with the dejected college students and listened as they said they wanted to prove their loyalty to their country by fighting for it.

Ching encouraged them to volunteer their service as non-combat civilian laborers.

“If they don’t trust you with a gun, maybe they’ll trust you with a pick and shovel,” he said. And so began nearly a year of service for 169 university students, assisting the war effort in a military labor battalion. The former university ROTC students called themselves the Varsity Victory Volunteers (the VVV, or Triple V), and they built roads and buildings, and broke rocks — armed, not with rifles, but with picks and shovels, hammers and saws, crowbars, and sledgehammers.

In June 1942, the AJA soldiers of the 298th and 299th Infantry were segregated into the Hawai‘i Provisional Battalion, and sent out of Hawai‘i to basic training in secret. They became the 100th Infantry Battalion (Separate), an orphan unit which no one wanted, at first. But their record-breaking performance in basic training proved that AJAs would be outstanding American soldiers.

Meanwhile, at home in Hawai‘i, the dedicated and loyal VVV impressed military officials, which helped change the minds of military and political leaders — paving the way for the formation of an all-Japanese-American unit: the 442nd RCT.

In February 1943, the War Department called for 1,500 AJA recruits for the 442nd. Because of their role in effecting the creation of the 442, members of the VVV were the first to hear the news and they voted to disband so they could join the unit.

On the U.S. mainland, 1,208 recruits volunteered from inside concentration camps, where their families would remain incarcerated by President Roosevelt’s Executive Order 9066.

In Hawai‘i, almost 10,000 volunteered. And on March 28, 1943, 2,686 members of the newly-formed 442nd Regimental Combat Team marched down King Street, lined up at ‘Iolani Palace, and then headed off to basic training on the U.S. mainland and onward to European battlefields. 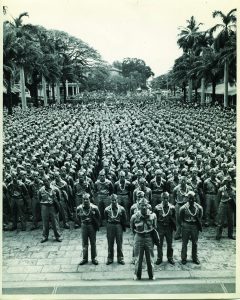 In just two years of combat, 14,000 men served in the 442nd, with a well-documented record of bravery that is unequaled to this day.
Much less is known about the vital roles and great danger faced by thousands of nisei linguists who served in the Military Intelligence Service (MIS). Their work as interpreters, interrogators, and translators was strictly classified during the war and for decades beyond.

A record of heroism and sacrifice

In 2010, the Congressional Gold Medal was awarded to members of the 100th/442nd and MIS. And surviving 442nd members have been honored with France’s highest and oldest award, created by Napoleon himself: “Chevalier dans l’Ordre National de la Légion d’Honneur” (Knight in the National Order of the French Legion of Honor) for their key participation in the liberation of France during WWII.

On July 15, 1946, President Harry S. Truman welcomed members of the 442nd to the White House. Acknowledging the challenges they faced at home and abroad, he said: “You fought not only the enemy but you fought prejudice, and you have won.” 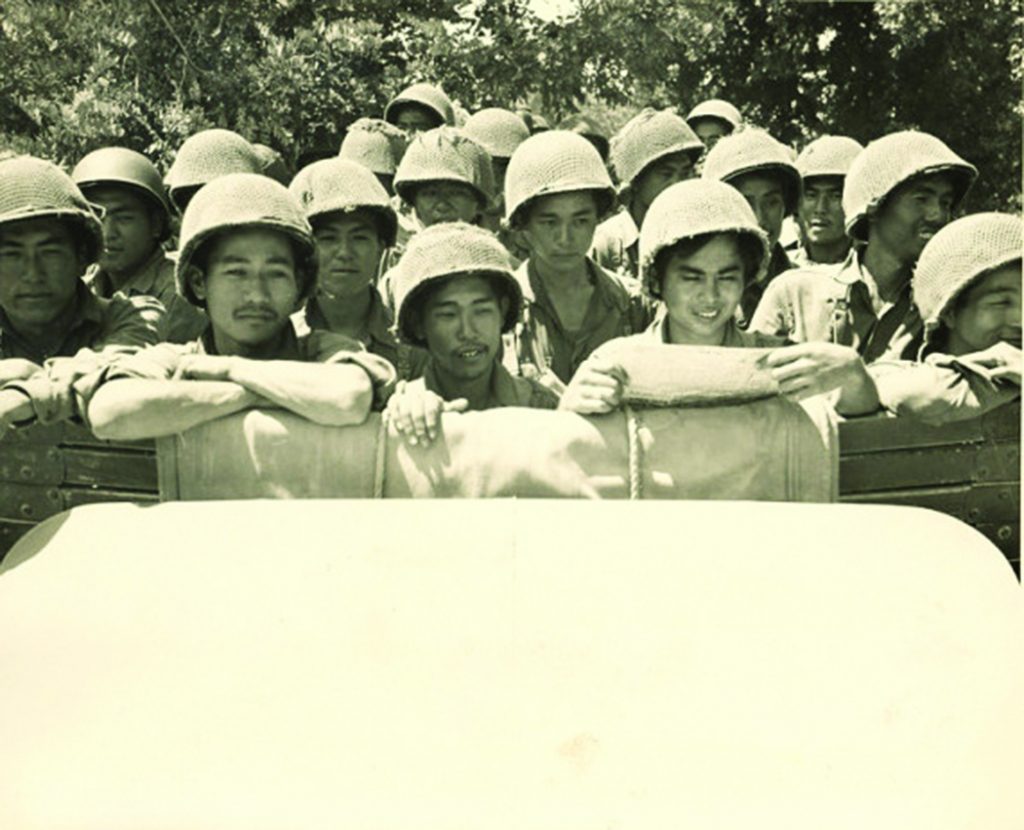 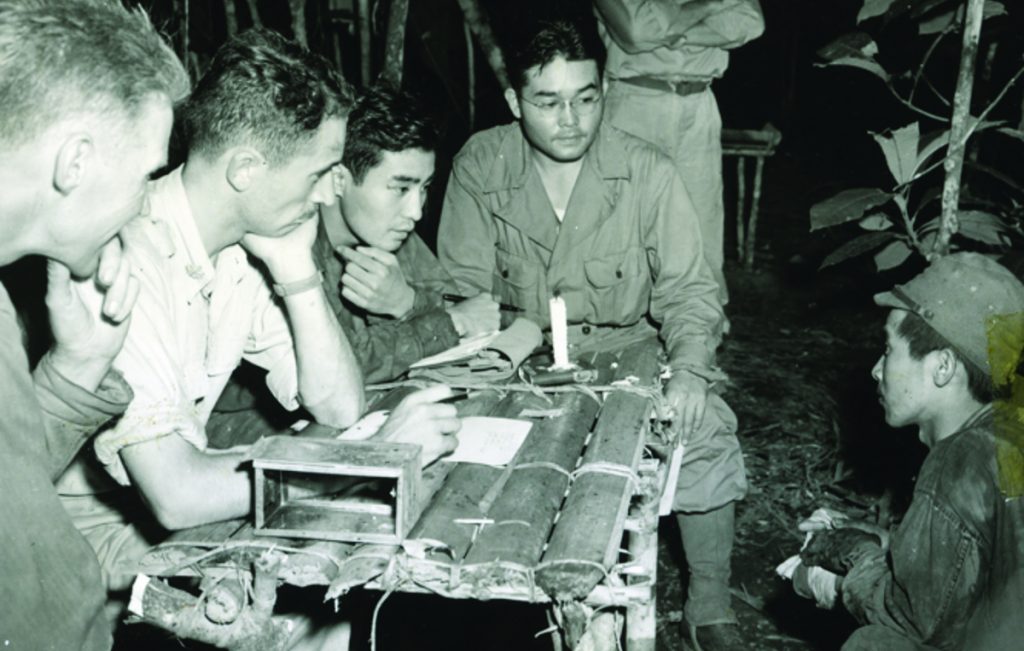 A local girl needing to tell a local story

“The untold story is the adversity these young men faced, the character they showed, for the 442 to be created in the first place.”
— Stacey Hayashi

It’s taken local girl Stacey Hayashi more than 15 years to bring this story of the 100th/442nd and MIS to the big screen. Her dream — to perpetuate stories like this for today’s youth and for future generations — took perseverance and sacrifice, like that of the veterans she passionately honors with this film.

To make her dream come true, the software engineer had to become a filmmaker. She had to become a fundraiser. She had to gather resources, conduct interviews, and write the screenplay. There was a lot to learn. But the resourceful serial entrepreneur, writer, and designer was determined that somehow, the stories of veterans who became her dear friends and family would be told.

“People know about the 100th/442 and the bravery they showed, fighting the enemy in Europe, liberating towns in Italy and France,” she said. “But most people don’t know what had to happen for the 100th or 442nd to even be formed,” she added, referring to the racial discrimination faced by Japanese in Hawai‘i and the U.S. West Coast before and after December 7.

Stacey believes that “films can be powerful tools in bringing stories to light and keeping them alive, as well as a source of healing.”

“Sharing stories or seeing them told can be cathartic for survivors. Hopefully, it will also open up dialogue between survivors and their families,” she said. “Though we couldn’t tell every story, I tried to include as many as we could. I hoped to capture the spirit of who they were and are, their happy-go-lucky attitudes and kolohe natures, even in the face of such great adversity.”

She wished all her veteran friends would see the film and know that they were remembered and appreciated. Sadly, Assoc. Producer Eddie Yamasaki of the 442nd RCT I Company, who helped champion the movie for 15 years, died a few months before its release. Also, Congressman K. Mark Takai, a steadfast advocate, succumbed to cancer in 2016. The film is dedicated to his memory.

Akira Otani (portrayed by Chad Yazawa) watched as the FBI arrested his father at gunpoint. Yet, he was among the very first to volunteer for the 442nd RCT. 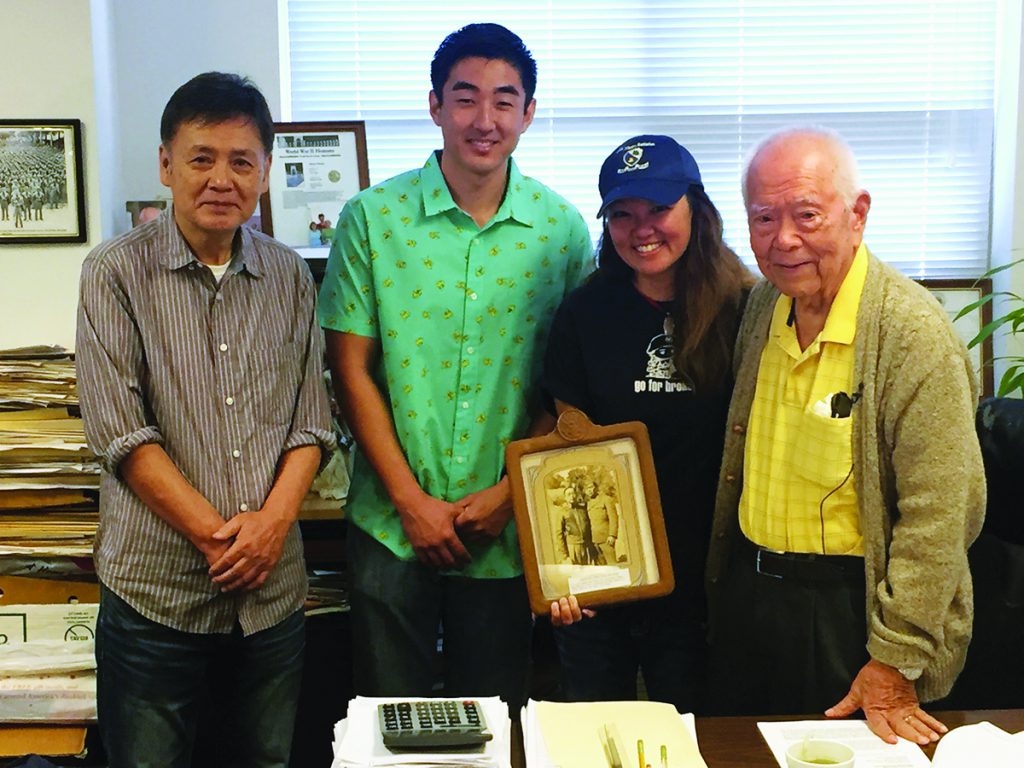 Many scenes were filmed at the actual locations where the real events took place. Here, the Varsity Victory Volunteers (VVV) stand with picks and shovels. 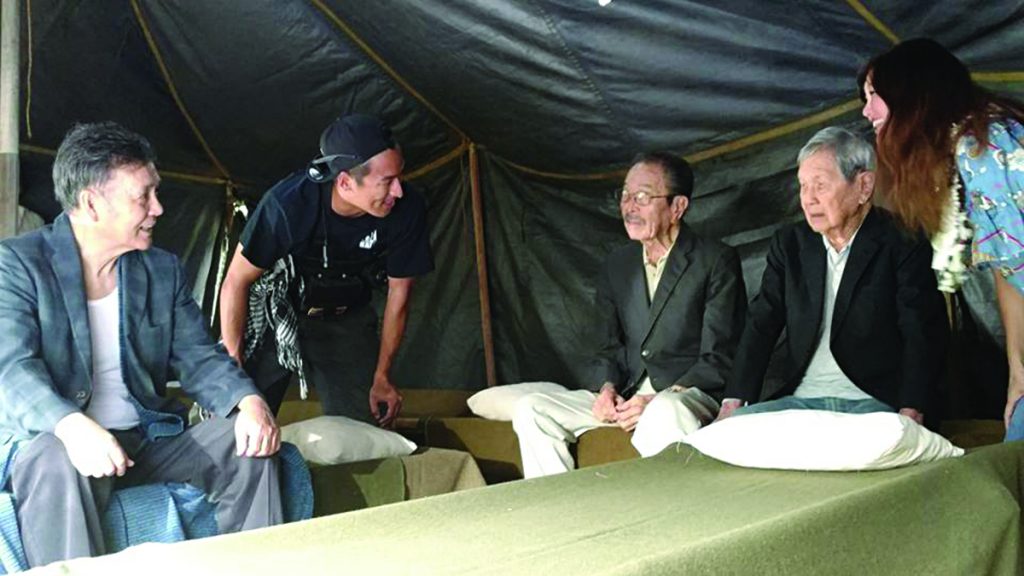 Stacey didn’t just become a filmmaker in her quest to share what she calls “the inspiring true story you’ve never heard, about heroes you didn’t know existed.” She also became a rising star in the world of comic books and Japanese anime and manga, writing and self-publishing a comic book, “Journey of Heroes: The Story of the 100th Infantry Battalion and 442nd Regimental Combat Team.” The historically accurate graphic novel, illustrated by Damon Wong, features cute characters that look a lot like the veterans they represent.

Thousands of the comic books have been donated to schools across Hawai‘i and the United States, introducing real-life heroes and perpetuating their stories for today’s youth and generations to come.

The great legacy of the greatest generation

Almost all of our WWII veterans are gone now, including Stacey’s great-uncles who served in the original 100th Battalion and the 442.
And through this film, Stacey is doing her part to keep alive the great legacy of the nisei veterans — a small part of the greatest generation. 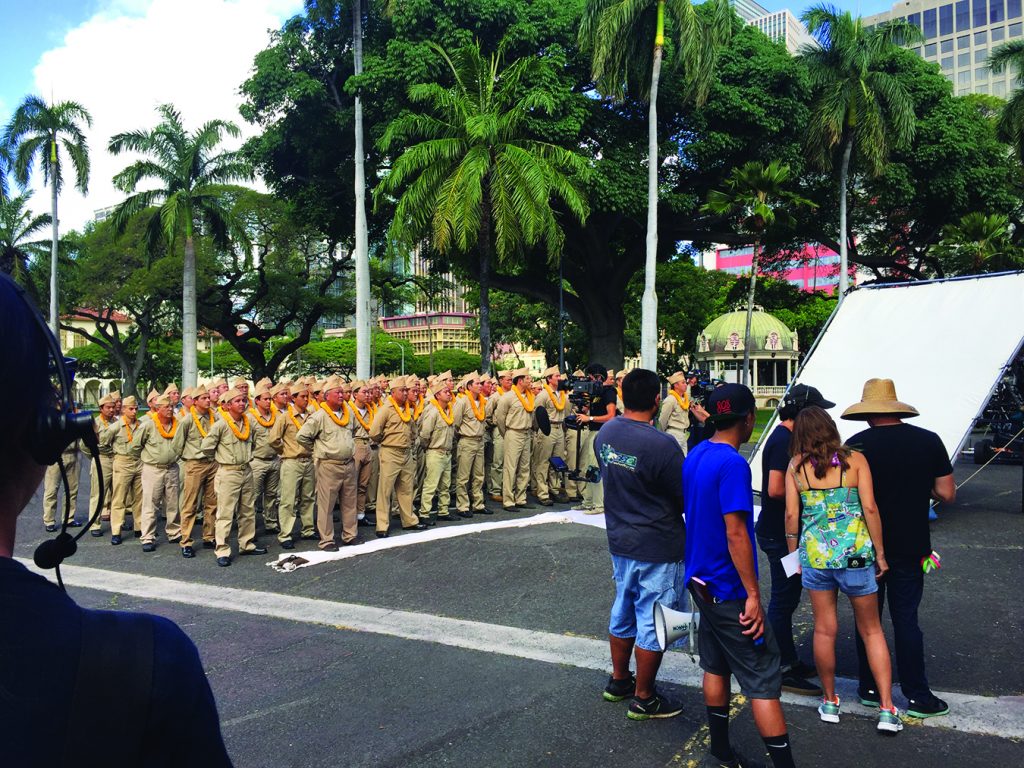 More than just a comic book —“Journey of Heroes” combines historically accurate text and Japanese manga-style drawings that appeal to readers of all ages. 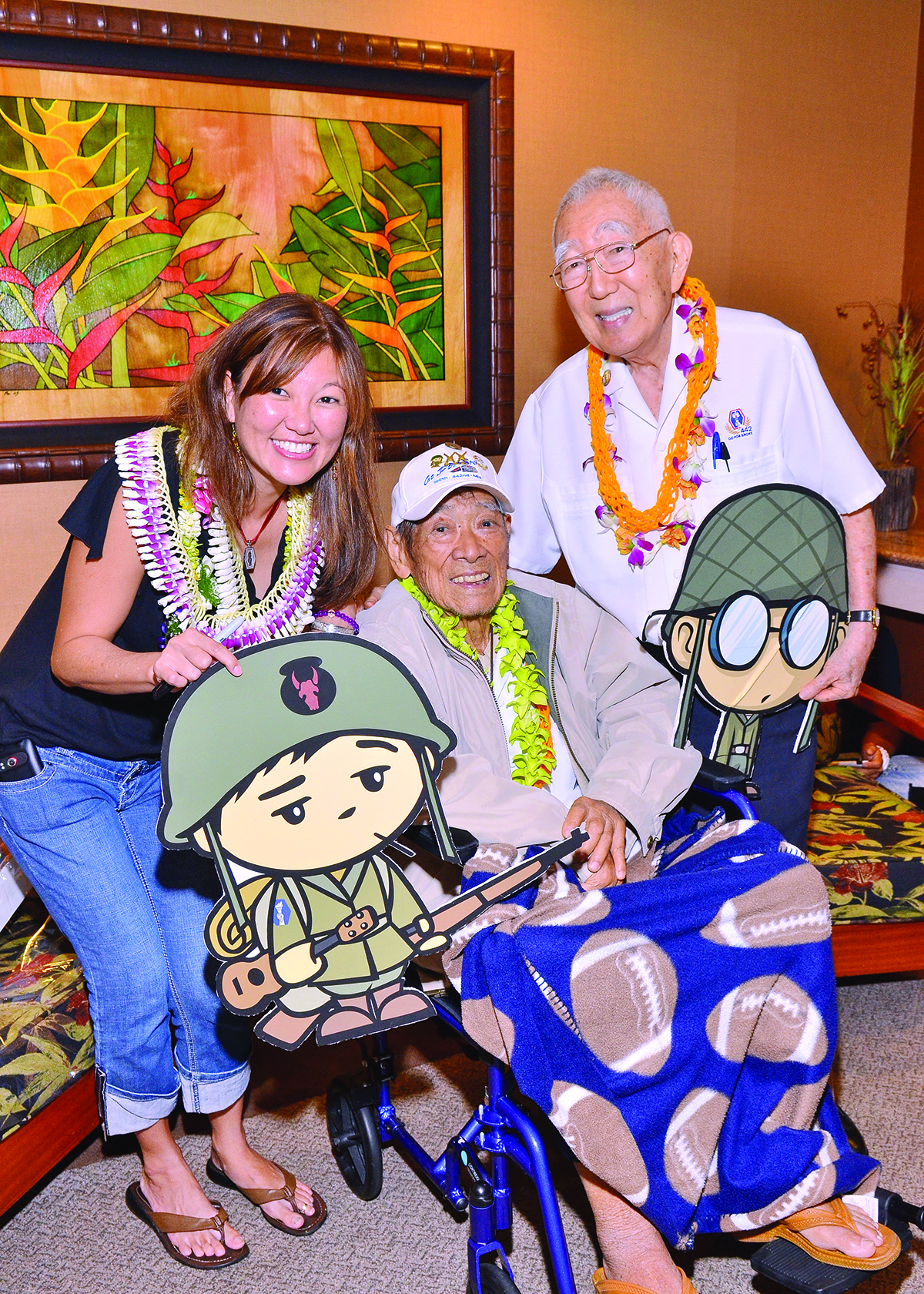 “Fear and racism are not good for anyone or any country, especially America, a nation of immigrants.” — Stacey Hayashi