Giving Your Voice to Charity: Inspiring Real Change With Advocacy 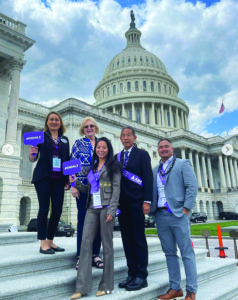 Especially during this time of year, many of us shift our mindsets to consider how we can spread aloha and do good in the world. Giving back to our community  comes in many forms. There are ways that take no money — donating your voice and time. “Activist philanthropy” is a newer term, but it simply relates to people who embrace the role of public advocate to raise awareness and bring precedence to essential issues. These people are speaking up and sharing their stories to inspire real change.

“We started realizing that this disease is definitely in our communities, but no one is talking about it. Some people don’t even know what it is.”

“When she started showing symptoms of cognitive decline in her early fifties, we thought it was because my mom wasn’t working anymore, and like those on summer vacation, you’d lose track of the days,” shares Amy. “When her cognitive abilities declined even further, we knew we had to get her to the doctor. That took some time, and it wasn’t easy to convince her to go to the doctor. Then there was a sense of relief when she got diagnosed, but I didn’t walk out of the doctor’s office with a single brochure on how to receive support, or any idea of how we would move forward and what to expect next. It slowly started changing when we began reaching out to the Alzheimer’s Association and kupuna organizations for support.”

Civic Engagement as a Centerpiece for Charity

Amy’s mom was 59 years old when she was finally diagnosed with younger-onset Alzheimer’s. There was a huge barrier for her family to qualify for insurance through Medicare and additional financial support because her mom was under 65. At first, they were denied, because the government had to be careful of fraudulent applications. But Amy and her father were relentless. She obtained letters of support from the Alzheimer’s Association and Dr. Oanh Meyer from the UC Davis Alzheimer’s Disease Center, where her father was an active participant in Alzheimer’s caregiver research and studies. She went to court and her family kept fighting, but admits her father was close to giving up. He didn’t think they would get approved after being rejected the first time.

“In Asian communities, and other communities of color such as Blacks, Hispanics, Native Hawaiian and Native Americans, there is a stigma in going to the doctor as well as certain levels of mistrust and fear of being mistreated or ignored when you do go,” Amy says. “Our family knew we had to share our experience, especially since we’re going through this disease so much earlier. I don’t want any other family like mine to feel helpless, lost, and confused while their loved one is declining in cognitive and physical abilities.”

In 2018, Amy started volunteering and fundraising for Alzheimer’s disease in her community in full force. She raised the second highest amount of money for the Walk to End Alzheimer’s on O‘ahu and she served as the co-chair for The Longest Day to support the Alzheimer’s Association Hawaii Chapter. Soon, she transitioned her volunteer work over to advocacy and became the Advocacy State Champion. She also served as the Alzheimer’s Association State Ambassador to achieve federal and state policy priorities by engaging with Hawai‘i’s elected officials to increase support for people living with Alzheimer’s disease and their families, and continue research for effective treatment and ultimately, a cure.

During her time as an ambassador, she gave her voice to the cause and saw a direct impact when Congress with the passing of the Supporting Older Americans Act of 2020 — which reauthorized the Older Americans Act (OAA) — and includes key provisions of the Younger-Onset Alzheimer’s Disease Act, which ensures  Americans living with Alzheimer’s disease and other dementia will have access to vital and affordable services regardless of age. The bill passed one year before Amy’s mom 65th birthday.

Finding the Courage to Give Your Voice

As it would be for most people, it was difficult for Amy’s dad to take on the caregiving role. Even though she was showing signs of decline at the time, they traveled and saw the world together. Together, they visited Hong Kong, Japan, Vietnam, Jamaica, Mexico and France. Amy’s father didn’t know at the time that those years of traveling were among the last she would be able to undertake. Over time, traveling got more complicated. She would have moments of confusion. But having that time together meant everything to them.

When Amy’s father was feeding her mother at a restaurant, a stranger came up to him and just patted him on the shoulder for encouragement. We can all give the gift of support by acknowledging caregivers with simple words and actions.

As the disease progressed and continues to progress to this day, everyday tasks got even more difficult. She wandered and needed help to get dressed, bathed and fed. Eventually, she became incontinent, and lost her ability to walk and speak.

Amy encouraged her dad to reach out using the Alzheimer’s Helpline, as well as other local organizations that help the aging community and served as a lifeline for their family.

By learning about the warning signs of Alzheimer’s disease (www.alz.org/alzheimers-dementia/10_signs), we can help recognize it and support families early in the game. Starting the conversations and sharing your experiences not only inspires others, but contributes to a pendulum shift to equality.

“Since I joined the Alzheimer’s Association, it is great to see they are now expanding their focus on diversity and research in health disparities in Asian, Black, Hispanic and Native Hawaiian communities,” Amy shares, “Improvements in science must be made for these populations. Our representation rises when we share our voices and make them heard.”

Every action and voice — big or small — will help. We may not all be public speakers, but we can certainly share resources and kind words with a caregiver. And this year, when you’re thinking about your holiday giving list, consider giving your voice to charity. Your voice and your story are precious gifts to those who must confront
Alzheimer’s each and every day.

If you know someone struggling with younger-onset or Alzheimer’s disease, or a related dementia — there is support:
24/7 Helpline 800-272-3900
alz.org/Hawaii
alz.org/help-support/i-have-alz/younger-onset
To join a support group or get more information: 808-591-2771
Donate to the Walk to End Alzheimer’s in your community until Dec. 31, 2022: act.alz.org/aloha