Get the Inside Sports Scoop 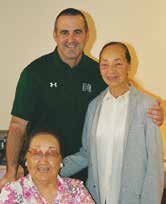 Nick Rolovich, head coach for UH-Ma¯noa, with club members of over 20 yrs., Liz Rathburn (sitting) and her sister Lydia Lake.

The Honolulu Quarterback Club (HQC), one of the nation’s oldest sports clubs, began in 1947 and is still going strong. There, you can hear little-known and personal stories from past and present sports greats. “You won’t find these sports stories on the front page of the newspapers,” said one long-time, regular attendee.

If you are an avid sports enthusiast, sports nut or just love University of Hawai‘i sports, come on down to our Monday meetings and enjoy a wonderful Chinese luncheon buffet at a reasonable price ($15). Contact HQC for more information and upcoming speakers.