From Father to Son; Son to Father

Rev. Paul S. Osumi, 1905 – 1996. “Today’s Thought” Who was that man behind those simply inspired messages, written in the daily newspaper column of the Honolulu Advertiser and published for over three decades for all of Hawai’i to read?

Norman Osumi, the youngest son of the late Reverend Paul Osumi, received many inquiries about publishing a new collection of “Today’s Thought.” But, Norman felt any new collections would need more since his father had already published three small volumes one in 1966 and the other two in the 90’s. With the labor of love, Norman took a decade to complete his research on his father’s interesting life.

In the Hilo Tribune, Norman states, “I started reading his journals, as well as letters he wrote and received from my mother, military authorities, Christian leaders, friends and church members. The more I read, the more interested I became in my father’s past, which he rarely talked about. He almost never mentioned the war years, when he was interned and encountered many disappointments and much hardship and disgrace. Many people told me it was common for the older generation, especially fathers, not to tell their children about their lives.”

Norman completed his research and published his book in 2013, Today’s Thought — Rev. Paul Osumi, The Man & His Message, a book inspired by his father’s life; a biography from his perspective.

He writes of his father’s childhood life living on O‘ahu and how he earned his academic scholarships in order to continue his studies. His father’s life in ministry and the ordeal of being wrongly accused as an enemy agent, arrested and imprisoned then shipped to a prisoner-of-war camp. He was then reunited with his family as they lived in Gila Relocation Camp located in Arizona for the remaining four years during World War II. Still with his father’s faith, he gave hope to the many with his inspirational messages.

Beyond the words of wisdom, the late Rev. Paul Osumi messages were written about life, giving words of encouragements and hope to the lives of many.

To the conclusion of the book, Norman included over 300 selected “Today’s Thought” inspirational sayings that were printed in the Honolulu Advertiser. One of them is this: 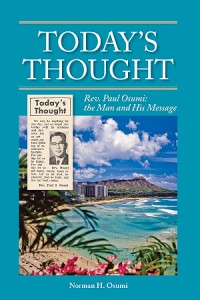 You may find this inspiring book, Today’s Thought — Rev. Paul Osumi, The Man & His Message by Norman Osumi online and stores near you: