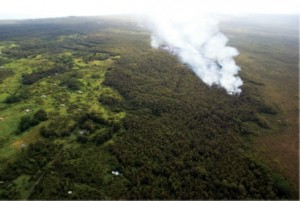 Photo courtesy of the USGS

Generations Magazine staff was invited to join a team of community volunteers on an evacuation outreach mission to Puna seniors living in the path of Kilauea’a latest lava flow. In past centuries streams of lava obliterated Puna farms and Kalapana Village, but most years, fertile soils and clear, ocean breezes make this region a nice place to farm and raise a family. Earthquakes, Hurricane Iselle and Kilauea make 2014 an unusually bad year.

Mauka from Pahoa Community Center, an onerous smoke plume rises from the forest — a constant reminder of encroaching hot lava. This day, the flow was predicted to reach town in two weeks. 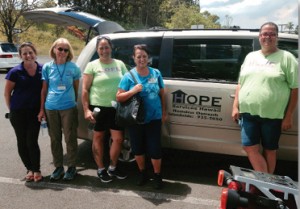 “This is what we do,” said Nurse Dawn, “We’ll keep checking on the elderly until they are all out of danger.”

We joined a team of five volunteers, including social services people and a registered nurse — searching Pahoa and the surrounding area for locations where seniors were known to live alone. “We need to document every senior who might be isolated and not have access to evacuation services. If they need assistance planning, moving or even finding alternative housing, we can connect them to the right agency. We want to know if they have an evacuation plan. Obviously, disabled seniors are most vulnerable,” said Lou Wanda S., who works for Hope Services Hawaii in Hilo. 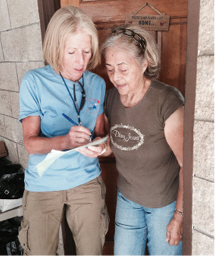 The van driver used an address list generated from the Hawaii County of Aging database and charted on a map using GPS coordinates. One by one, seniors were slowly checked off. We went to single-family houses, apartment buildings, and rooms above shops. Some seniors had already moved out. Those who remained were in various stages of planning or moving. The personal canvassing process is time consuming, but seniors were welcoming, and glad that the county was checking on them.

“My mother and I already moved our valuables, says Mrs R. If the lava comes, we’ll go and leave everything else behind,” she said, as if evacuating was a routine. 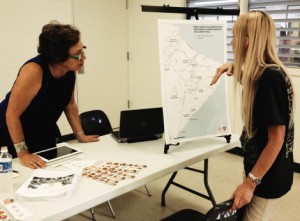 It’s hard for people who don’t live in Hawai‘I County to imagine taking lava flows in stride, but Pahoa ancestors always lived with Pele in their backyards. Sometimes lava stops before it reaches a house; sometimes it continues to the sea and flows for weeks or years. The flows are fickle and unpredictable, sometimes destroying an entire forest, but flowing around, sparing a single tree.

Back at the Command Center in Pahoa Community Center, the team debriefed the day and prepared to go out the following day. They would continue until all the vulnerable are identified and evacuated. Many, many other agencies and volunteers will offer assistance to displaced seniors as they find new housing and establish new routines.