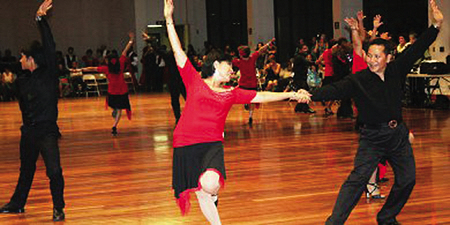 Dancing at the Palladium, Honolulu

If you find your exercise regimen becoming boring and a chore, stop fighting it and switch to ballroom dancing!

AARP The Magazine, March 24, 2011 issue, reports that dancing is not only fun, but it’s therapeutic. Dance can, among other things, boost your cardiovascular health and bone strength as well as improve balance. Joe Verghese, professor of Neurology at Albert Einstein College of Medicine, reported that “unlike many other physical activities, dancing involves significant mental effort and social interactions.” Frequent dancing, which involves both intellectual and social stimulation, was reported as the only physical activity shown to reduce the risk of getting dementia.

So while learning dance steps with a partner, brain health and general well-being is improved while having fun exercising, socializing, and forming new friendships. 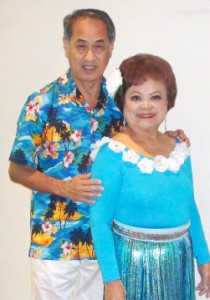 Retired Computer Specialist, Herbert Ota is a living testimony benefiting from ballroom dancing. While vacationing on a cruise, Herbert collapsed when the cruise ship docked in Vienna, Austria. On October 25, 2013, Herbert was immediately taken to a hospital where emergency triple by-pass surgery was performed. 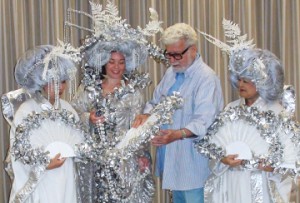 They religiously attend dance rehearsals five times a week with a team of eight couples from the Pearlridge Chapter. They showcased their dance number at the HBDA 55th Anniversary Ball on May 3, 2014 at The Palladium in Honolulu. This celebration was a gala affair, with different dance exhibition teams representing different chapters, each choreographed by HBDA’s own creative dance instructors. In addition, Herbert had also rehearsed and prepared for CABARET III, an HBDA fundraiser directed by Jack Cione. It was a new extravagant musical comedy production with a cast of 82 performers in lavished costumes from the HBDA, Arcadia and Craigside.

With all of Herbert’s scheduled dance rehearsals, he is recuperating well and gaining his strength back from his open-heart surgery. He is looking simply great, a testament to the wonders of dance therapy with the HBDA.

You are never too young or too old to learn to dance. If you would like to get in good shape, stay physically fit and mentally alert, while having fun and making new friends, contact any one of our HBDA chapters.

HBDA is “the place to learn to dance”. You are invited and more than welcome to come, and dance with us!