The Beauty of Hawaiian Quilting 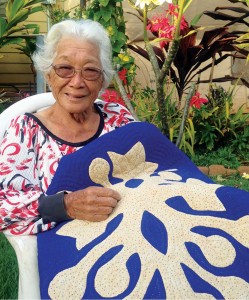 Henrietta Mahuna learned Hawaiian quilting from another Hawaiian quilter. The handicraft has been passed down for two centuries — since the Hawaiians learned the echo style of quilting from New England missionaries. First, appliques are stitched to a plain field. Quilting follows the shape of the applique, first on the outside edge. The next row of quilting runs parallel but a short distance away, like a ripple in a pond. Soon the whole blanket is quilted. A style fashionable in the early 1800s was preserved and became a treasured tradition in Hawai‘i.

“Mama” Mahuna sits on her shady deck and quilts every day. Neighbors, friends and mainland visitors who love to quilt come not only to learn, but also to “talk story.” In the old days, conversation was always accompanied by busy hands — sewing, preparing food or finishing a church project. Henrietta, who is Native Hawaiian, was raised in Hāna and moved to West Maui in 1942. She worked for Baldwin Packers as the only female field supervisor. Later she was promoted to work the Honolua Store at Kapalua Resort. She invented the “Honolua Burger.”

Now 95, Henrietta still loves quilting and spending time with the ladies as they create beautiful “blankets” and pillow covers. “I like designing the patterns and cutting them out. I’ve made many different ones, but the Hawaiian trees and flower patterns are what people seem to like best,” she says.