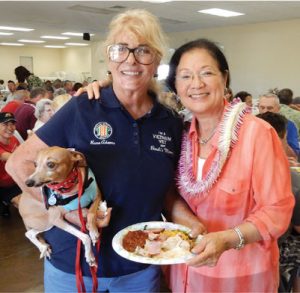 Rona Adams and Sen. Mazie K. Hirono at an
O‘ahu Veterans Center Thanksgiving dinner. With Rona is Bindi, one of her two therapy dogs who also help veterans.

I’ll be honest. When Percy Ihara asked me to write a column for veterans, it caught me off guard. “Writer” is not what I see in the mirror — U.S. Army nurse, college grad, civilian nurse manager, trainer and advocate for Vietnam Veterans are all in my kit. I’m good at paperwork: reports, manuals, a master’s thesis, letters home for injured soldiers who needed help writing and Hawai‘i State Legislature testimony.

But this is different — it’s just you and me having that first conversation. Pardon my butterflies. I can only talk about what I know — helping people — civilians, military and vets. I did two tours in Vietnam as a captain in the U.S. Army Nurse Corps, which covered the Tet Offensive. I am considered a Tet Offensive survivor. I worked in both operating and emergency rooms.

Two things I learned: War is hell (I wish I could use some other word) and no matter how crappy the situation was, we could always find something to laugh about. The majority of us come back changed (some more than others), and yes, I have PTSD and some Agent Orange issues. In future columns, we can talk about these things, too.

I came to Hawai‘i in 2001, retired from nursing in 2003, and joined the Veterans of Foreign Wars (VFW) and Vietnam Veterans Association (VVA). I represent the VVA at the O‘ahu Veterans Council. If you’re a veteran, have active military or veterans in your family, or just want to reach out to that veteran next door, this column is for you. 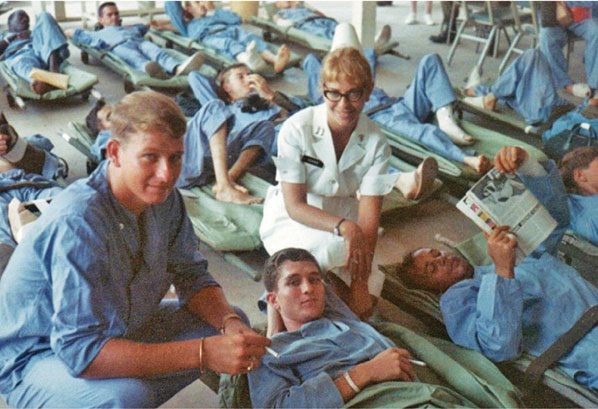 You’ll be hearing a lot about plans for the State of Hawai‘i 50th Anniversary of the Vietnam Commemoration in 2017 to honor Vietnam and Vietnam-era veterans from 50 states, our territories and allies. They will be joining our activities here in Hawai‘i. In the next edition, you will be able to register and sign up online to volunteer.

Happy to meet you. If you want to say “hello,” visit www.generations808.com and post your comments at the bottom of my column.